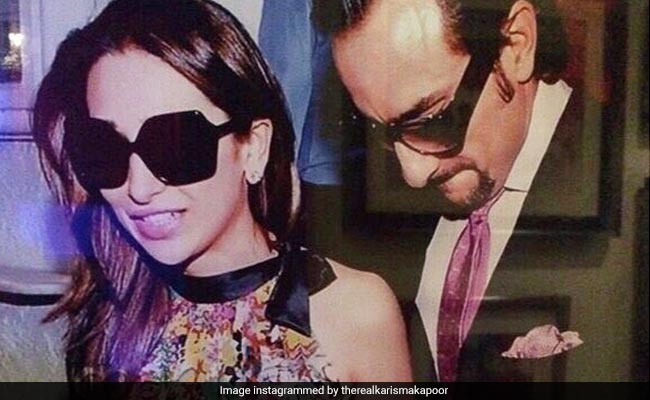 Saif Ali Khan might be a social media recluse but as the actor celebrates his 49th birthday, his fans, family members and colleagues posted on the social media, expressing their love and shared some of the cutest messages. One such birthday wish was posted by Saif's sister-in-law Karisma Kapoor. In her post, Karisma referred to the Omkara actor as "Saifu" and shared her "favourite" throwback picture with him. She captioned the post: "Happy birthday Saifu! We love you (my favourite pic of us ) #family #flashbackfriday."

Karisma Kapoor did not reveal when or where the picture was taken but we simply loved it. However, Karisma and Kareena Kapoor's best friend Amrita Arora revealed that the picture was clicked during her wedding (which took place in 2009). "That's a pic from my wedding... Love it," wrote Amrita Arora.

Happy birthday saifu ! we love you ( my favourite pic of us ) #family #flashbackfriday

Meanwhile, Sara Ali Khan - Saif's daughter with Amrita Singh also wished the actor on social media. She posted a throwback picture on her Instagram profile, which features Saif along with Sara and his sons Ibrahim Ali Khan and Taimur. "Happiest birthday Abba. I love you so much," wrote Sara.

Happiest birthday Abba I love you so much

Another birthday wish came from Saif's brother-in-law Kunal Kemmu (who is married to Saif's sister Soha Ali Khan). He posted a picture with the birthday boy and he captioned it: "Happy Birthday Mr cool. Lots and lots of love... Always."

On the work front, Saif Ali Khan was last seen in the second season of Netflix's popular web-series Sacred Games. In terms of films, the actor will next be seen in Jawaani Jaaneman. His line-up of films also includes Laal Kaptaan and Taanaji: The Unsung Warrior.