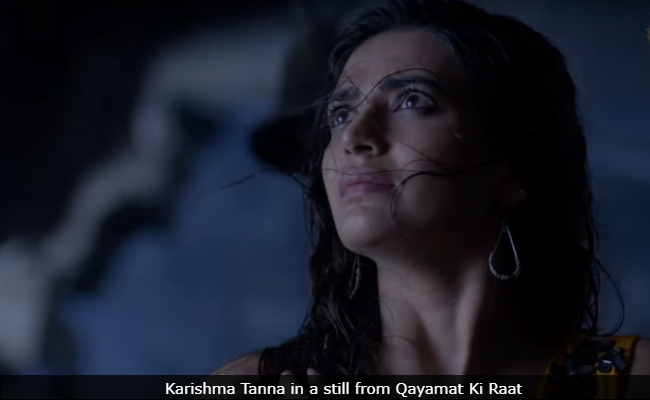 Karishma Tanna in a still from the show. (Image courtesy: YouTube)

Ekta Kapoor has produced many successful TV drama series but she believes that her new show Qayamat Ki Raat will definitely "bring spook back" in the audiences lives, reports news agency IANS. During a recent media interaction, Ekta talked about her upcoming project and said that she always tries to make shows on fresh stories and that her new show will induce a sense of fear in the audiences." "People are scared to be scared. So we worked out the story of Qayamat Ki Raat which brings spook back in our lives." She added, "My team and I are always working towards getting newer stories for the audience. The core of this concept was when we realised that even though being scared is a very strong emotion, we hardly experience it in our daily lives," IANS quoted her as saying.

Talking about the show, the producer revealed that Qayamat Ki Raat focuses on the myth "tantrik kabhi martein nahin" - in the show a vengeful tantrik haunts the lead couple (played by Karishma Tanna and Vivek Dahiya). Ekta said that both Vivek and Karishma (who was recently seen in Sanju) are "phenomenally talented" and added: "I have worked with both Vivek Dahiya and Karishma Tanna in the past. I have immense faith in their fresh pairing."

Promoted
Listen to the latest songs, only on JioSaavn.com
Qayamat Ki Raat is a supernatural-drama. Apart from Viveka and Karishma, the show also features Sumit Bhardwaj, Dalljiet Kaur, Manraj Singh, Abhinav Kohli and Nirbhay Wadhwa in pivotal roles. The show went on air on June 23 this year.

(With inputs from IANS )