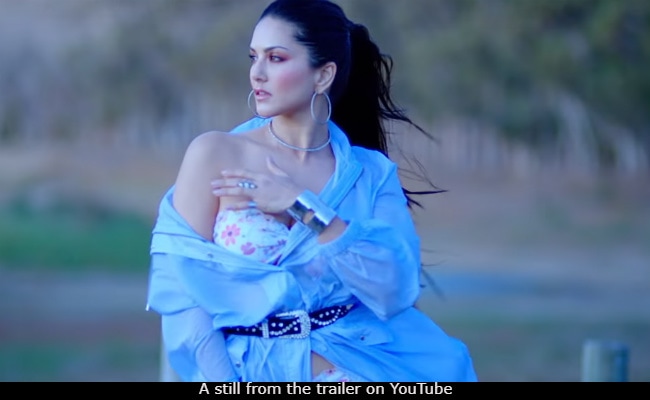 Still from the trailer of Karenjit Kaur: The Untold Story of Sunny Leone (courtesy YouTube)

Karenjit Kaur: The Untold Story Of Sunny Leone, the web-series based on the life of the actress, just dropped its trailer and it looks pretty interesting. The trailer begins with a green-room shot of present day Sunny Leone, who appears to be prepping for an interview, while she's introduced as the one actress who is very much loved in India but is also subjected to equal hatred. Soon, the scene shifts to Sunny Leone's childhood - she was born as Karenjit Kaur Vohra to Indian immigrants in Canada. The trailer shows, financial difficulties in the family encouraged Sunny to join a join career in erotic entertainment.

The actress had previously mentioned in interviews that her original name was inappropriate for the career path she had chosen and hence, she introduced herself in the professional sphere as Sunny Leone. She was selected as men's magazine Penthouse's 'Pet' for March 2001 at the age of 19 and the trailer provides a glimpse of that phase. While she started providing a handsome income for the family, her parents nervously quipped of she's won a lottery. Now was the time for the big reveal and Karenjit (who has become Sunny by now) sits her parents down.

The trailer also offers a beautiful depiction of Sunny Leone's bond with her brother Sundeep. The two-and-a-half minute trailer ends with a reference to the controversial interview in 2016, which was criticised for being sexist in nature and the interviewer was largely condemned for his choice of words. In the trailer, Sunny Leone appears to shift in her seat as she's reminded that adult film stars are often equated with sex workers but, she comes back with a befitting reply.

To sum it up, Karenjit Kaur: The Untold Story of Sunny Leone tracks a "girl next door's" tumultuous journey to being a successful adult star and then a Bollywood diva. Rysa Saujani, 14, plays the younger version of Sunny Leone in the web-series, which will premiere on July 16.