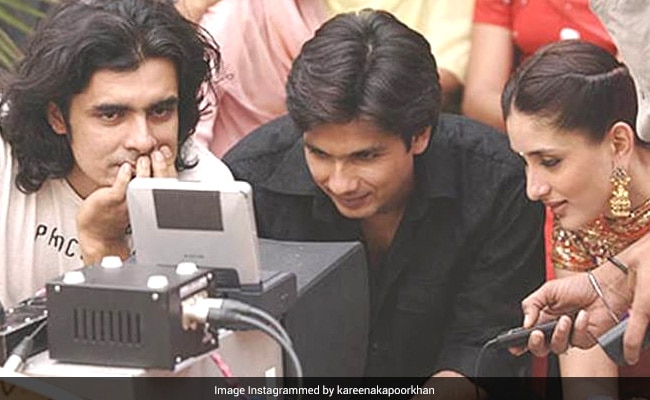 The chronicles of effervescent Geet from Bathinda and no-nonsense guy Aditya from Mumbai, clocked 13 years on Monday. We are obviously talking about Imtiaz Ali's cinematic gem Jab We Met, which completed 13 years on Monday. On the special occasion, a special memory from the film was shared by the lead actress Kareena Kapoor on her Instagram profile. A quick glance at the throwback picture shared by Kareena reminded us why Geet will always remain everybody's "favourite." She posted a BTS picture with the film's lead actor Shahid Kapoor and the film's director Imtiaz Ali, from the sets of the song Nagada Baja.

Jab We Met was the last film in which Kareena Kapoor and Shahid Kapoor were seen sharing screen space. The actors, who dated for more than four years, featured in the 2016 film Udta Punjab. However, they did not have a single scene together in the film. Other than Jab We Met Shahid and Kareena co-starred in Fida, 36 China Town, Milenge Milenge and Chup Chup Ke.

Jab We Met showcases the story of Geet and Aditya, who become friends during a train journey. They travel together and discover their true selves. They fall for each other during the process. The film gave us some unforgettable dialogues and iconic songs. Also, it started a trend of long tees paired with patiala salwars, and hoop earrings.