Karanvir Bohra Finally Made It To Kathmandu After Not Being Allowed To Fly. He Tweeted This 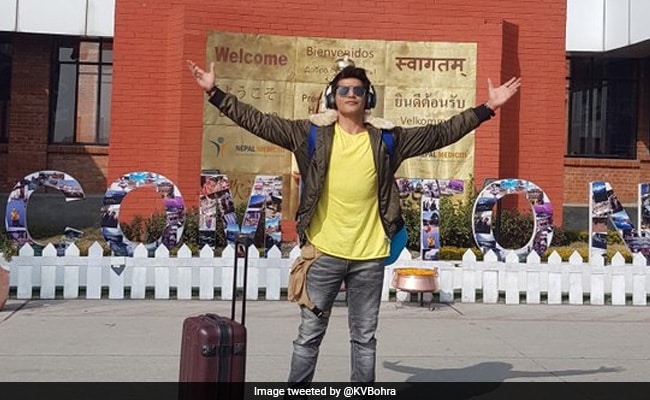 TV star Karanvir Bohra, who found himself stranded at New Delhi airport yesterday due to lack of documents, finally reached Kathmandu on Friday morning. He checked in from the capital of Nepal with a tweet, writing: "The Eagle has landed. Kathmandu. Straight to shoot Casino." Karanvir Bohra is in Nepal to shoot for his digital debut, a Zee 5 show titled Casino - My Game, My Rules, in which he co-stars with Mandana Karimi. On Thursday afternoon, Karanvir tweeted to say that he was not allowed to board his scheduled Air India flight to Nepal from New Delhi as he didn't have the correct travel documents. Karanvir's tweets revealed he wasn't aware that Aadhar Card is not considered a valid document while flying to Nepal, which Indians don't require visas to visit.

Here's what Karanvir Bohra tweeted after his Kathmandhu touchdown.

The Eagle has landed #kathmandu .... Straight to shoot #casino@ZEE5Premium@backbencherpict@gajjarhardikpic.twitter.com/40ytofIVk9

On Thursday, many on Twitter pointed out to Karanvir that he should have known better about carrying proper documents while travelling to Nepal. The actor, who agreed with his fans, also argued that his lack of valid documents should have been pointed out by officials at the Mumbai airport, who let him fly to New Delhi without any notification. Replying to an Air India tweet listing details of valid travel documents, Karanvir said he had someone fly to Delhi from Mumbai to get him his passport: "If I was told in Mumbai itself I would have arranged it immediately and not make my guy fly down to Delhi to hand me the passport."

Thank u 4 this link,& I believe not only 4 the passengers,its 4the officials2, how could they allow me to travel on an invalid document? If I was told in Mumbai itself I wud have arranged it immed & not make my guy fly down2 Delhi to hand me the passport. https://t.co/sBIA3MlvLg

Karanvir, who incorrectly used the word 'deported' in his tweet, tagging the airline and Minister for External Affairs S Jaishankar, had written: ""Deported at Delhi airport on my way to Nepal. Travelling with Aadhaar card. Not allowed. Nepal government allows (PP, voters ID and Aadhaar by road, by air only PP and VI). Then why did Air India in Mumbai let me fly with my Aadhaar? Why didn't they stop me there?"

Deported at Delhi airport on my way to #nepal.trvlng wid #adhaarcar not allowed
Nepal gov alows (PP,voters ID & Adhaar by road,by air only PP & VI)Then,Y did @airindiain in Mumbai let me fly with my Adhaar?Y didn't they stop me there? #indianembassy@DrSJaishankar@IndiaInNepal

Last year, Karanvir Bohra was detained at Moscow airport for a damaged passport. He had thanked the then External Affairs Minister Sushma Swaraj and other officials for arranging a temporary passport and a visa on quick notice.