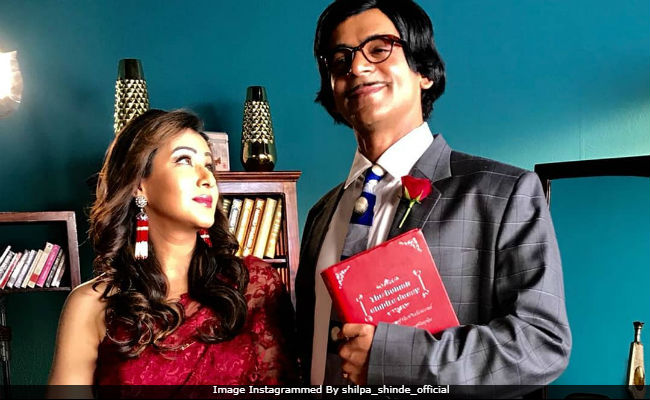 Shilpa Shinde and Sunil Grover on the sets of the show (Image courtesy: shilpa_shinde_official)

New Delhi: Comedian Kapil Sharma's former co-stars Ali Asgar and Sugandha Mishra are also part of Sunil Grover and Bigg Boss 11 winner Shilpa Shinde's new web show, reports The Indian Express. The show, titled Dan Dana Dan, will air twice in a week on the Jio TV app during the Indian Premier League (IPL) matches. "It will be an out and out comedy series where the cricket angle has been smartly incorporated. For the first time, a comedy show will hit the digital waves and with such a talented star cast, the makers are quite confident of making it a hit project. Every episode will also see some cricketers joining in for a fun conversation and some gags. Recently, Sunil flew down with the team to Chennai to shoot for the pilot episode with the Chennai Super Kings team," a source told Indian Express.

Some weeks ago, Sunil Grover, who quit Kapil Sharma's last show due to a fight, had announced via a tweet about a project, appearing to be Dan Dana Dan. TV actor Suyyash Rai is also part of the show.

Without revealing any details about the show, Shilpa Shinde recently shared a picture with Sunil Grover and wrote.

There is no replay, no third umpire, no second inning in real life. So be happy and keep everyone happy. Hope we will be successful in our little efforts of bringing smile on your faces in this stressful life.. Enjoying work with @whosunilgrover

Sugandha too posted a picture from the sets of the show with Shilpa. She is seen dressed in Chennai Super Kings jersey.

Meanwhile, Indian Express also reports that in Dan Dana Dan, Sunil Grover and Shilpa Shinde will discuss the matches, the IPL trend in the country and other related things. Ali Asgar, Sugandha Mishra and Suyyash Rai will make appearances in the episodes. The team recently shot with Mahendra Singh Dhoni and Harbhajan Singh for a special segment.

Both Sugandha Mishra and Ali Asgar had quit The Kapil Sharma in support of Sunil Grover after the fight.

Promoted
Listen to the latest songs, only on JioSaavn.com
Last year too, Sunil Grover had hosted an app-based show with Sunny Leone during one of the IPL matches.