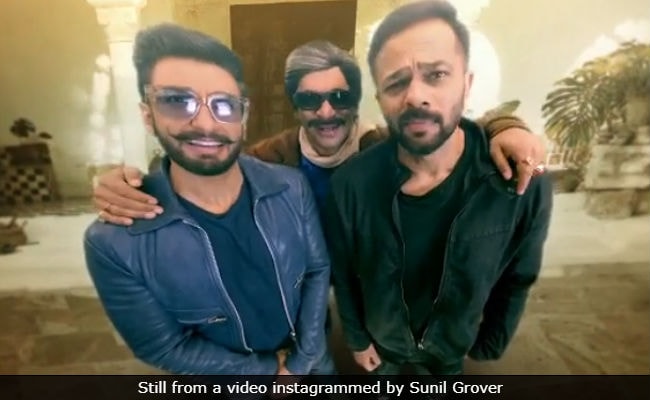 Comedian Sunil Grover's first guests on his upcoming television show Kanpur Wale Khuranas will be Simmba director Rohit Shetty and main man Ranveer Singh. Sunil instagrammed a promo of his show announcing the first guests and the premiere date of the show - December 15, which is 13 days before the release of Simmba. However, it is not known if Sara Ali Khan, who stars opposite Ranveer in the film, will also join the team on the television show. Kanpur Wale Khuranas is headlined by Sunil Grover, his first show as lead after Mad In India, which was a debacle. Here's the promo of Kanpur Wale Khuranas featuring Ranveer Singh:

Simmba is Ranveer's first release after his wedding to actress Deepika Padukone. Simmba is the story of a corrupt cop who turns his life around after a life-altering event. Simmba also features Sonu Sood and Ajay Devgn. On Thursday, Simmba made it to the list of trends after the film's first song, titled Aankh Maare, hit the Internet. Aankh Maare is the revamped version of a song of the same name, which featured in 1996 film Tere Mere Sapne.

Sunil Grover and Kapil Sharma parted ways in 2017 and after several attempts to reunite, the former colleagues severed ties and Sunil swore never to work with Kapil again.

As of now, the team of Comedy Nights With Kapil comprising Upasna Singh, Ali Asgar, Chandan Prabhakar, Sumona Chakravarti and Kiku Sharda have split up. Upasna and Ali star in Sunil Grover's Kanpur Wale Khuranas while the rest of team will be seen in The Kapil Sharma Show, starting December 24.