Kangana Ranaut's Terms For 'Peace' With Super 30 Team, As Tweeted By Sister Rangoli 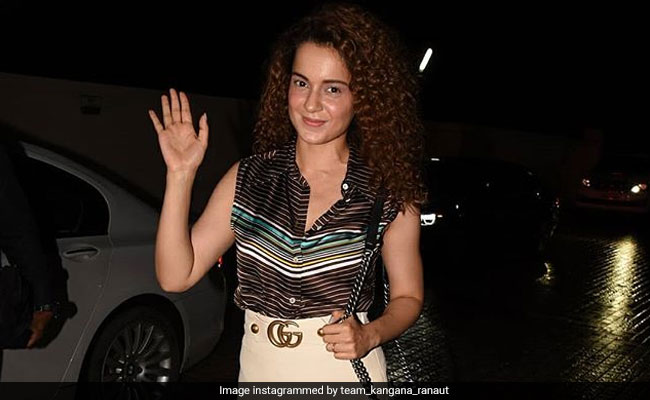 A day after Rangoli Chandel tagged actor Hrithik Roshan in angry tweets about mud-slinging over the clash of Mental Hai Kya, starring her sister Kangana Ranaut, and Super 30, featuring Hrithik in the lead role, she posted terms of Kangana's 'peace pact' (of sorts). Kangana Ranaut and Hrithik Roshan are on less than cordial terms after their public feud in 2017 but more on that later. Rangoli, who doubles as Kangana's spokesperson and manager, tweeted on Thursday: "With due respect to everyone, if Kangana is not harmed, trolled or bullied she won't speak against Super 30 cast or its makers... please take a note... Peace." In her tweet, Rangoli also shared a report published in a daily, in which Mental Hai Kya producer Ekta Kapoor had said that Kangana cannot be blamed for the revised release date and that it was her decision.

With due respect to everyone, if Kangana is not harmed, trolled or bullied she won't speak against Super 30 cast or its makers @SpiceSocial1 please take a notePEACE pic.twitter.com/gtcuVbsHOW

Earlier this week, the makers of Mental Hai Kya rescheduled the film's release date to July 26 when it will clash with Super 30. After several webloids reported that the clash was designed on purpose, the team released a statement saying: "The shift in the release date is a decision taken after recommendations from the distributors, trade analysts and a top research team... we did everything in our purview to ensure the other parties that there will be no mud-slinging and it will be a dignified release."

On Wednesday, after posts implying Kangana's involvement in the new release date, which appeared to be a paid PR exercise, went viral, Ekta Kapoor tweeted: "The ugly underground tweets have begun. I've promised to keep it clean and have assurances from my actors on the same. I hope personal assaults on them stop, because it's my decision and not theirs." Following Ekta Kapoor, Rangoli Chandel's went on a Twitter rant against Hrithik Roshan and team Super 30 warning them to not to drag Kangana is the controversy. "Just because he can't say anything to Ekta he will make Kangana a punching bag? Well, you are mistaken," a part of Rangoli's tweet read.

Kangana Ranaut vs Hrithik Roshan started in 2017 after the actress claimed that she was in a relationship with her Krrish 3 co-star, who categorically refused to accept it. Hrithik and Kangana also sent each other legal notices asking for apologies.