"This is called a mechanical horse and it was used in movies like Gladiator, The Last Samurai and Braveheart," tweeted Rangoli 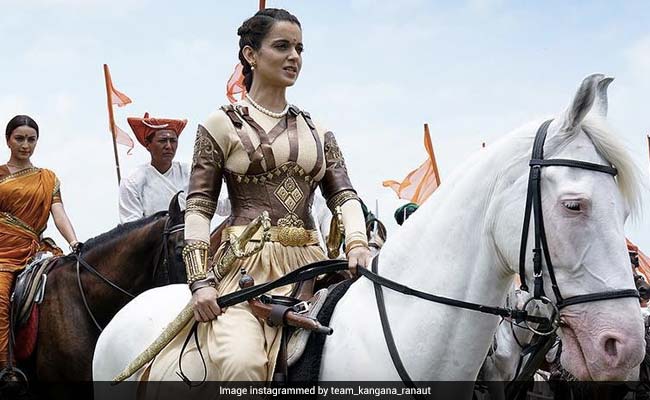 Kangana Ranaut in a still from Manikarnika. (Image courtesy: team_kangana_ranaut)

A video of Kangana Ranaut riding a mechanical horse, from the sets of her recently-released film Manikarnika: The Queen Of Jhansi is doing the rounds on social media, for which the actress is being trolled incessantly. A section of the Internet trolled Kangana for using a mechanical horse instead of a real one. A Twitter user shared the video and wrote: "Wow! that escalated fast." Another comment read: "Had me dying especially the part when actress hollered the war cry." Now, Rangoli Chandel, who seemed reasonably upset with the trolls, came to her sister's rescue and explained that the mechanical horse is used for shooting close up shots and that it has been used to shoot sequences in films such as Gladiator, The Last Samurai and Braveheart. "How else do you take close up on a galloping horse, this is called a mechanical horse and used in movies like Gladiator, The Last Samurai and Braveheart. Only for the close ups. Dumb people get excited to see technology," read Rangoli Chandel's tweet.

How else do you take close up on a galloping horse, this is called a machanical horse and used in movies like Gladiator, The last Samurai, Brave heart and Manikarnika ... only for the close ups ....dumb people get excited to see technology... Dumbos !!! https://t.co/ECDDGvZZlr

And here's what some of the Twitter users posted:

A fan referred to Kangana as "Modern Jhansi ki Rani" in his tweet.

A Twitter user shared the video and commented: "What lies beneath."

Trolls aside, some fans supported Kangana. A fan shared a video, in which the Queen actress could be seen riding a real horse. "Some losers having no knowledge and are trying to humiliate Kangana Ranaut. In Manikarnika, Kangana has done all the stunts herself."

Take a look at some of the posts from fans here:

Some losers having no knowledge about filmmaking techniques are trying to humiliate #KanganaRanaut...In #Manikarnika kangana has done all the stunts herself... pic.twitter.com/3pkAfGYPnj

These are for closeup shots. Why are u guys behind the QUEEN. When ur Hollywood & Bollywood fav actors does same. It is Real. Really??? She can ride real horse yet she used mechanical for closeups as the actors in this pic know how to run but used mechanical one for closeup pic.twitter.com/81VnmN4poC

Kangana Ranaut played the role of Rani Lakshmi Bai in Manikarnika: The Queen Of Jhansi. Kangana even directed a segment of the film along with director Krishna Jagarlamudi. The film collected over Rs 100 crore within 3 weeks of its release.

On the work front, Kangana Ranaut will next be seen in Prakash Kovelamudi's Mental Hai Kya and Ashwiny Iyer Tiwari's Panga.