Kangana on 'Cold War' With Deepika Padukone: It is Katti Batti 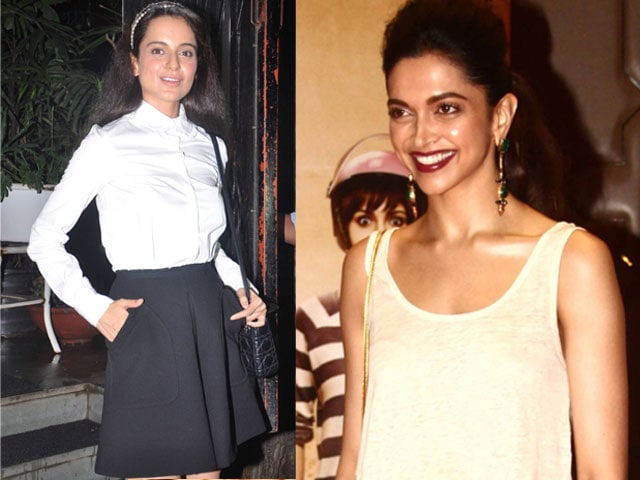 Kangana at Mumbai's Nido Restaurant on June 14. (Right) Deepika at the success party of PK on June 10

Mumbai: Actress Kangana Ranaut said on Sunday that her relationship with Deepika Padukone was one of 'Katti Batti'.

When asked to comment on reports of a 'cold war' between her and Deepika Padukone, she said, "It is Katti Batti".

Deepika had previously dedicated a Best Actress win to Kangana in honour of her Queen performance, but is believed to be one of few actors who didn't congratulate Kangana in person after she was named Best Actress at the National Awards.

The actress eventually made a phone call to Kangana in Manali, where her parents live. Kangana is quoted as having told The Hindustan Times earlier, "Deepika called me, and clarified that she had no personal equation with me to make a direct call (to appreciate her performance in Queen). Also, I explained to her how it would have been unjust for me to publicly acknowledge an award from her when I have decided not to attend any awards functions. It was an emotional and heartfelt conversation. I appreciate that she called me; she is truly courteous and very emotional, and I just love that."

Besides her equation with Deepika, Kangana also clarified her reasons for not doing Sultan opposite Salman Khan and said it was mainly because of date issues.

The grapevine had suggested that Kangana chose Vishal Bhardwaj's Rangoon starring Shahid Kapoor and Saif Ali Khan over Sultan, which is backed by Yash Raj Films.

"I had already given dates to Rangoon and that's why I couldn't do the film," Kangana told reporters here.

This is reportedly the second time that Kangana has rejected a role opposite Salman, the first one being Bajrangi Bhaijaan - she was the first choice for the lead actress in Kabir Khan's film.

Commenting on reports that she has become choosy about roles and increased her fee, Kangana said, "I have always been choosy. Regardless of whether you are successful or not or there are options available or not, you have to choose the best. Earlier, there were not much options for me but now there are options. So I can afford to be choosy".