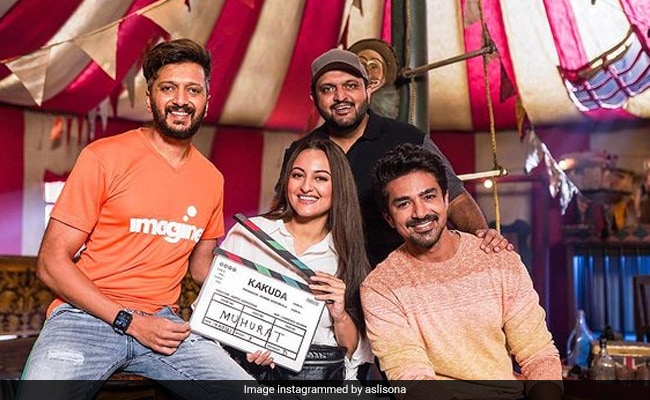 Sonakshi Sinha, Riteish Deshmukh and Saqib Saleem are all set to bring a new “spooktacular” horror-comedy for their fans. The trio have collaborated for RSVP Movies-backed project Kakuda. The movie is being directed by Marathi filmmaker Aditya Sarpotdar. Sonakshi Sinha announced the new film through an Instagram post today. The 34-year-old actress shared a picture of herself, Riteish Deshmukh, Saqib Saleem and Aditya Sarpotdar on Instagram. Sonakshi Sinha can be seen holding the movie's clapboard in the picture. In the caption, Sonakshi revealed that the film's shoot began today. “Boooooooooo. Triple trouble on the way! Get ready for a spooktacular - laughter riot with RSVP's homegrown production, #Kakuda! Shoot begins today,” she wrote in the caption of the post.

The post prompted scores of comments from the trio's fans. Besides others, RSVP Movies commented on the post and heaped praises on the lead trio. "Yeh trio kitna sona hai (this trio is so amazing). Let the #Kakuda journey begin," a comment from RSVP Movies' official account read.

Besides Sonakshi, Saqib Saleem also shared the update on Instagram. Saqib also shared the same picture to announce the new film. "Aaj ki taaza khabar (today's fresh news)," he wrote in the caption of the post.

Coming back to Sonakshi Sinha, the actress was last seen in the 2019 film Dabangg 3, co-starring Salman Khan. She will soon be seen in war-dramaBhuj: The Pride Of India, which will release on Disney + Hotstar on August 13.