Kajol, Tanuja And Tanisha Mukerji 'Dressed Up Together For A Change' And The Internet Loved It

The Internet thinks Kajol's latest Instagram post, featuring Tanuja and Tanisha Mukerji is "too much beauty in a single frame" 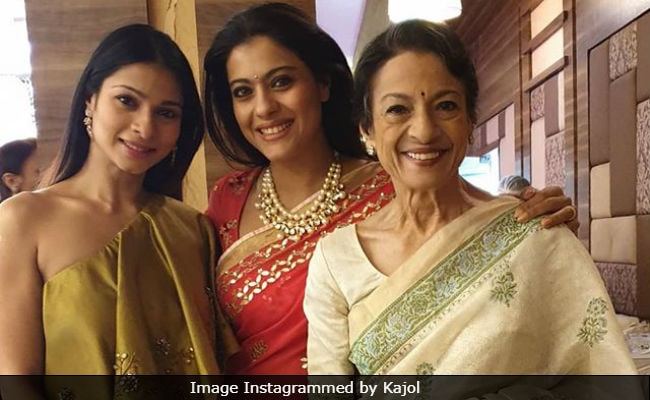 We simply love it when Kajol's actress-mother Tanuja makes an appearance on her Instagram post and her latest Instagram post is not an exception. BTW, did we tell you that besides Tanuja, Kajol's latest Instagram post also features her sister Tanisha Mukerji. On Sunday, Kajol treated her fans to a million-dollar picture of herself along with her sister and mother and we must tell you that the all three of them look simply stunning. In the photograph, Tanuja and Kajol can be seen dressed in cream and red sarees respectively, while Tanisha can be seen in an olive green gown. Kajol accompanied the post with a caption: "All dressed up and together for a change!" Kajol's sister Tanisha reposted Kajol's picture with a different caption on her Instagram profile and wrote: "Me and mine." Just like us, the actress' fans were also smitten by the lovely picture and wrote comments like "three incredibly beautiful women" and "too much beauty in a single frame." Kajol's post received over 88,000 likes on Instagram within an hour.

All dressed up and TOGETHER for a change !

Meanwhile, Tanisha Mukerji also shared a picture from their fam-jam and wrote: "I'm my mommy's date today!" She added hashtags like "famjam" and "#mymommyisbeautiful."

Earlier this month, Kajol shared a picture of herself with her mother Tanuja, which had been clicked in the Botanical Garden, Singapore. Kajol summed up the post as "Good times." This is the post we are talking about:

How can we forget the throwback photo that Kajol shared on her mother's birthday this year, which she accompanied with a loved-up note.

Kajol has not announced her upcoming project as of now. She was last seen in Pradeep Sarkar's Helicopter Eela, co-starring Riddhi Sen and Neha Dhupia.