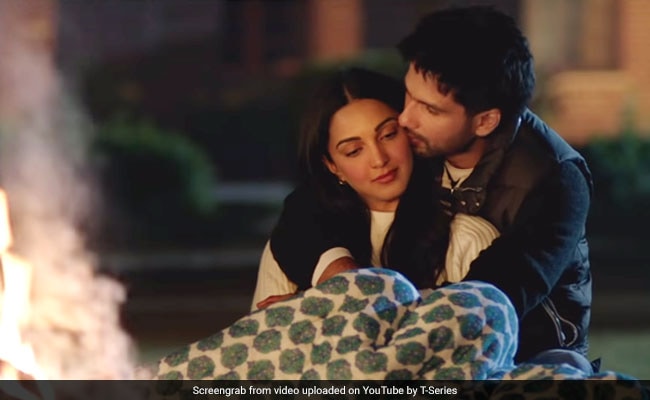 Shahid and Kiara in a still from Kabir Singh (courtesy YouTube)

Shahid Kapoor's Kabir Singh co-star Kiara Advani was put in a spot at the trailer launch event of the film earlier this week when a reporter kept asking about details of the kissing scenes in the movie. A Times Of India video shows while Kiara Advani avoided the queries and tried to laugh it off, Shahid Kapoor, who clearly has had enough, took charge of the situation and shut the reporter down. "Haven't you had a girlfriend in a long time or what?" was Shahid's firm response when the reporter tried to change the topic and misquote Shahid's words. But Shahid brought the discussion to an end and said: "Let the kissing be. Ask about something else - people have acted also in the movie."

As the crowd cheered for Shahid's sassy response, he quickly moved on to the next question. Shahid Kapoor and Kiara Advani are first time co-stars, courtesy Kabir Singh, which is the Hindi remake of Telugu blockbuster Arjun Reddy. Directed by Sandeep Vanga, the film tracks the story of a top medical student with anger management issues and his troubled romance with the love of his life. The trailer of Kabir Singh incorporates a couple of kissing scenes, featuring Shahid and Kiara.

Meanwhile, the protagonist has also been shown as a high functioning alcoholic and drug addict, which means the trailer is filled with scenes featuring Shahid Kapoor as drinking and smoking. The 38-year-old said the foul language in the movie and the drinking and smoking scenes are simply to bring out the dark streak of his character in an interview to IANS: "Kabir Singh is an intense love and beautiful love story and please don't get drawn into the fact that there is alcohol, cigarettes and things like that are shown in the film."

"Sometimes to show the pain a man goes through, you need to use certain things to help the audience understand that and there is a lot of honesty in the film," he added.