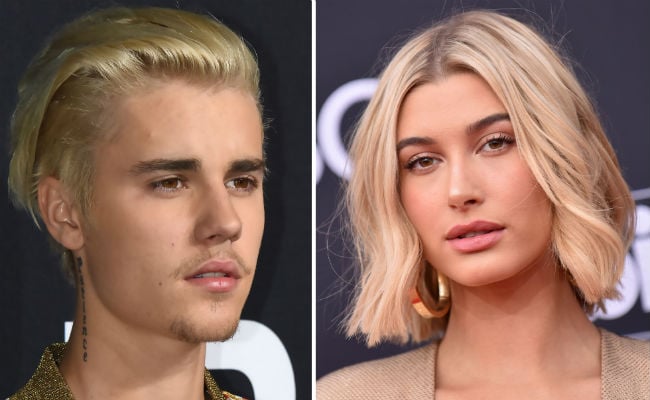 Justin Bieber and Hailey Baldwin have briefly dated in 2015 and 2016 (Image courtesy: AFP)

Pop star Justin Bieber got engaged to model Hailey Baldwin on Saturday night, TMZ reports. They have apparently been dating for over a month now. The TMZ report states that Justin Bieber, 24, proposed to Hailey Baldwin, 21, over dinner at a resort in the Bahamas. Also, sources told TMZ that the pop star's security team asked the people around to put their phones away as "something special was about to happen." Meanwhile, a E! report states that Justin had already bought the ring but it was a 'sudden decision.' "Justin made arrangements for the ring when they were in NYC and knew that he wanted to propose to her. It was a sudden decision but Justin always knew Hailey and him had a special bond that was incomparable," a source told E!. "The proposal was a very happy moment and Hailey was taken off guard. Her face was in shock but you could tell they are both so in love," it added.

However, neither Justin nor Hailey have announced their engagement as of yet. Meanwhile, his parents Jeremy Bieber and Pattie Mallette posted cryptic messages for their son, without really giving any details about the said engagement.

"Proud is an understatement! Excited for the next chapter!" the singer's father Jeremy Bieber wrote on Instagram, along with a picture of his son.

@justinbieber Proud is an understatement! Excited for the next chapter!

Justin Bieber and Hailey Baldwin's engagement reports has apparently left Biliebers 'sad'. "My Justin Bieber fangirl heart from middle school to high school doesn't know how to feel about this" and "Wow, I'm genuinely sad. #JustinBieberEngaged," are some of the tweets posted.

My Justin Bieber fangirl heart from middle school to high school doesn't know how to feel about this. #JustinBieberEngaged