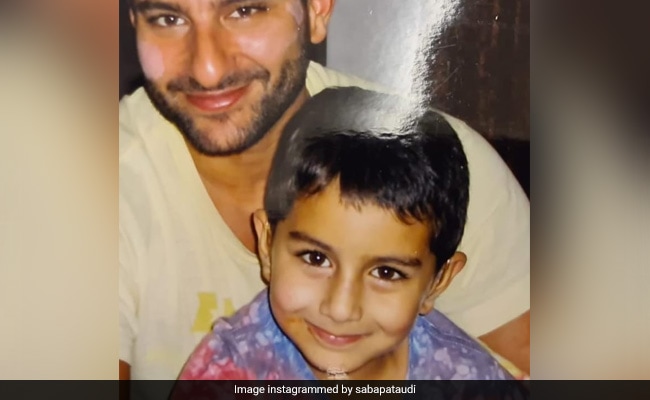 Now that's what we call a blast from the past. (Image courtesy: sabapataudi)

Our Tuesday couldn't get any better as we chanced upon a million dollar throwback picture of Saif Ali Khan and his son Ibrahim. The photo was shared by Saif Ali Khan's sister Saba on her Instagram profile. Ibrahim and actress Sara Ali Khan are Saif Ali Khan's children with his first wife, actress Amrita Singh. He is now married to actress Kareena Kapoor and the couple are expecting their second child but more on that later. On Tuesday, Saba Ali Khan posted a blast from the past featuring pint-sized Ibrahim posing with his father. "My champs," read a part of her caption. Saba had earlier in the day shared another throwback picture of Ibrahim from his childhood and had asked her Instafam to guess the boy's name. Her latest post arrived as a hint for the users.

And here's what Saba Ali Khan shared earlier on Tuesday:

Last August, Saif and Kareena announced their second pregnancy ina joint statement that read: "We are very pleased to announce that we are expecting an addition to our family. Thank you to all our well-wishers for all their love and support."

He was last seen in the Prime Video's web-series Tandav.