Raai Laxmi is introducing herself in Bollywood with Julie 2, which also marks her 50th film 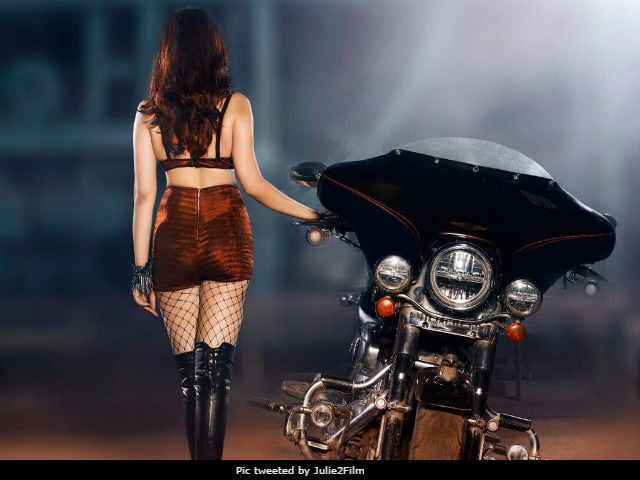 Julie 2 teaser: A poster of the movie (courtesy Twitter)

New Delhi: The teaser of Julie 2 released on Wednesday took the Internet by storm. Julie 2 casts South actress Raai Laxmi in the titular role in the erotic thriller. Raai Laxmi is introducing herself in Bollywood with Julie 2, which also marks her 50th film. The teaser features Julie in a rather bold persona and also documents the several ways she impacts the people around her. In several tweets by the film's official handle, the character has been described like: "The minute you reach in to her eyes, you are likely to get mesmerized! She's mystical; she's magical." Julie 2 also stars actors like Rati Agnihotri, Sahil Salathia, Aditya Srivastava, Ravi Kishen, Pankaj Tripathi and Nishikant Kamant.

Julie 2 tracks the story of the dark side of Bollywood and also ventures into the ugly world of politics and underworld smuggling. The credits for writing and directing the movie go to Deepak Shivdasani. Julie 2 will be produced by Vijay Nair. The full fledged trailer of the film will arrive on September 4.

Watch the teaser of Julie 2 here:


Ahead of the teaser, trade analyst Taran Adarsh introduced the protagonist of the movie with a new poster, saying: "Julie is back; and this time she isn't naive. She's BOLD, she's BEAUTIFUL and most importantly BLESSED."

Julie is back; and this time she isn't naive. She's BOLD, she's BEAUTIFUL and most importantly BLESSED!

Julie 2 is actually a sequel to the director's 2004 Julie, which starred Neha Dhupia, Priyanshu Chatterjee, Sanjay Kapoor and Achint Kaur in key roles. This year, Raai Laxmi's film will also release in Telugu, Tamil and Kannada. The film is slated to hit screens on October 6.
Comments
Raai Laxmijulie 2 teaser