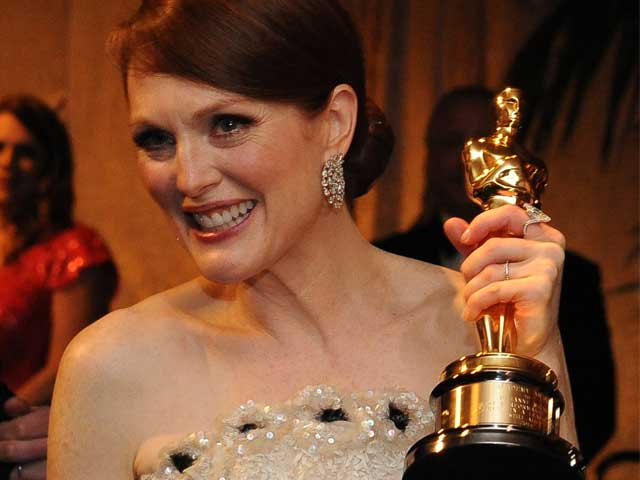 Julianne Moore, who won the best actress Oscar on Sunday, was a late-bloomer who turned 30 before she hit the big screen -- but has more than made up for it ever since.

The win came on her fifth Oscar nomination, and is the crown jewel in a career already rewarded with three Golden Globes -- including one for Still Alice last month -- a Primetime Emmy and a BAFTA, also for her latest film.

"I read an article that said that winning an Oscar could lead to living five years longer. If that's true, I'd really like to thank the Academy, because my husband is younger than me," Moore quipped as she accepted her award.

She also said she was "thrilled" to be able to shine a light on those suffering from Alzheimer's, noting that "so many people with this disease feel isolated and marginalized."

Those last two helped her join the elite club of actors to score two Oscar nominations for different films in the same year. She also scored Academy Award nods for Boogie Nights (1997) and The End of the Affair (1999).

Born Julie Ann Smith in December 1960 in Fayetteville, North Carolina, Moore lived in 23 different cities during her childhood and adolescence thanks to her father's job as a military judge.

While her dad wanted his daughter to become a doctor or a lawyer, Moore earned a fine arts degree in acting at Boston University and then headed for New York, where she launched into a career in theater and television that included a stint on soap opera As the World Turns.

Her first big screen role came in 1990's Tales from the Darkside: The Movie, but it wasn't until three years later that she shot to fame with minor roles in Robert Altman's Short Cuts and The Fugitive with Harrison Ford.

Since then, Moore -- who lives in New York with her husband Bart Freundlich and their two children -- has confirmed herself as one of only a handful of actresses who can make the transition comfortably between commercial cinema and art house fare.

She also easily moves between comedy and drama, as defined in 2001, in her roles in science fiction comedy Evolution and family drama The Shipping News.

In her leading role in Far from Heaven, Moore played the tormented wife of a gay sales executive in the 1950s who forges what was at the time an explosive inter-racial relationship with her black gardener.

In The Hours, she plays a mother desperate to break out of the constraints of being a suburban housewife, prompting her to ponder the meaninglessness of her life and to come close to committing suicide. The role won her a Silver Bear best actress prize at the Berlin Film Festival.

The roles stand in striking contrast to her portrayal of FBI agent Clarice Starling in the 2001 movie Hannibal -- the second in the thriller series launched with Silence of the Lambs.

More recently she was seen in 2010's The Kids Are All Right, in which she and Annette Bening star as a lesbian couple thrown into turmoil when the father of their children (conceived by artificial insemination) re-enters their lives.

She also won the best actress award at last year's Cannes Film Festival for her role as a shallow starlet in Canadian director David Cronenberg's biting Hollywood satire Maps to the Stars."

Moore joined the cast of dystopian future blockbuster The Hunger Games: Mockingjay - Part 1 out last year, and will appear in Part 2 due for release in November this year.

"My life may be a pretty crazy life at times, but it's a very privileged one -- being able to earn a good living doing what you love," she told Britain's Daily Telegraph last month.

"Not many people have such an opportunity."