Juhi Chawla Has Started Her "Diwali Safai Abhiyaan." Have You?

"Getting rid of all the unused items," wrote the actress 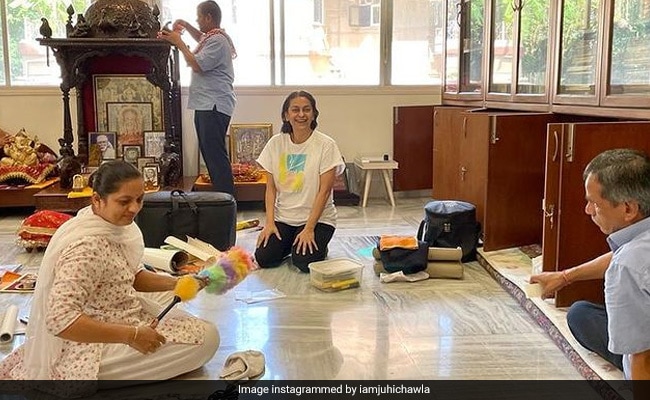 Diwali is just a few days away now and like everyone else, actress Juhi Chawla has also started deep-cleaning her house for the festival. How do we know this? On Monday, the actress posted two pictures of herself cleaning her house and throwing out "unused, not-working-but-still-kept items" with her staff. In the first photo, Juhi Chawla can be seen sitting on floor as her staff helps her "get rid of hoarded-up" items while the second one features her cleaning a cabinet. "Diwali Safai Abhiyaan... Getting rid of all the unused, hoarded-up, one-day-it-will-fit-me, not-working-but-still-kept items," she wrote in her caption and added: "Have you all started as well? #diwalicleaning."

Juhi Chawla is giving actress Archana Puran Singh major cleaning goals. The latter commented this on Juhi's post: "Lovely! You're inspiring me to do the same... waise Diwali safai has also started in my house. But I want to be as involved in it as you seem to be. What fun. Decluttering is so therapeutic."

Juhi Chawla stepped into Bollywood with 1986's Sultanat but her first film as a lead actress was 1988's Qayamat Se Qayamat Tak, in which she co-starred with Aamir Khan.

Juhi, who was one of the top actresses of Bollywood in the Nineties, has featured in several films like Amar Prem, Chandni, Swarg, Pratibandh, Ishq and Mr. and Mrs. Khiladi, among many others.

The actress was last seen in the 2019 film Ek Ladki Ko Dekha Toh Aisa Laga, in which she co-starred with Anil Kapoor, Rajkummar Rao and Sonam Kapoor.