Jersey Review: On the acting front, Shahid is the Man of the Match. The team effort behind him is strengthened by the performances from Mrunal Thakur and Ronit Kamra, a confident child actor. 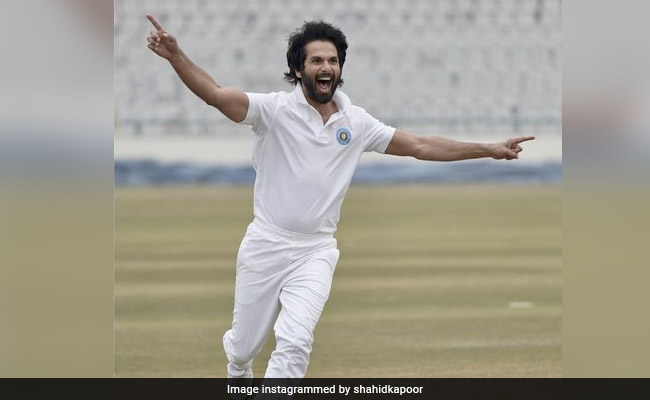 Jersey: Shahid Kapoor in a still from the film.(courtesy: shahidkapoor)

A man's undying passion for cricket, a father's life-altering promise to his seven-year-old son and a husband's many failings in a marriage between unlike poles provide the warp and weft of Jersey, writer-director Gowtam Tinnanuri's remake of his 2019 Telugu hit of the same title. Parts of it are a snug fit. But segments of the 170-minute film, now out in the theatres after numerous postponements, could have done with some pruning.

The emotional chords that Jersey hits, especially those that pertain to the father-son relationship, make the right music, but perfect consonance eludes the film because far too much of it is devoted to the sporting action around which the story revolves.

The cricket on view suffers the repercussions of overkill and tends to be monotonous, predictable and exaggerated. It is worsened by the shallowness of the running commentary, which of course is the bane of most Indian sports dramas driven by the belief that the audience needs constant spoon feeding.

On the field, Jersey is an unending flurry of maximums, a large percentage of them flowing from the bat of the protagonist; off it, the film strings together some delicate cuts and glances in service of a poignant tale of a man desperate to make up for lost time.

While much of the credit for what works in Jersey should accrue to Tinnanuri's screenplay, it is Shahid Kapoor's star turn that holds the film together. The actor is impressively restrained and layered as he fleshes out a man dealing with the consequences of the missed chances and quirks of destiny that, despite his stupendous feats as a batsman in first-class cricket, stopped him short of greatness

In a brief prelude, a young man walks into a bookstore in Bangalore - the Telugu Jersey opens in Times Square, New York - and picks up the last copy of a bestselling cricket biography. The next scene reveals that the book is about his father, "the best batsman of his time".

It is about Arjun Talwar, a very gifted Punjab batsman who was a prolific run-scorer in his heydays. We see a glimpse of the man walking out to bat in a mid-1980s Duleep Trophy final in which he helps North Zone register a famous win.

Cut to ten years later. Why Arjun Talwar never got a national call-up is still the beyond the comprehension of the man himself and his long-time coach and mentor (Pankaj Kapur). As the story gathers pace, it is revealed that he hung up his boots at the age of 26 never to return to a cricket field.

Now 36, Arjun is a spent force. Life has painted him into a corner. His will to claw his way back into the thick of the action, whether as a cricketer out of touch with the sport or as a government employee under suspension for bribery, has deserted him.

His wife Vidya (Mrunal Thakur) wants him to redeem himself by proving his innocence and wrest back his job. His son Ketan (Ronit Kamra), who has inherited his dad's cricketing genes, wants him to buy him a Team India jersey for his birthday because the boy believes he will be the school team captain if he sports one. Talwar is unable to fulfil either wish.

He needs Rs 50,000 to bribe his way back into government employment and Rs 500 to buy a jersey. Vidya, a Chandigarh hotel employee, is keen to help him financially with the legal appeal against his suspension but is in no mood to spare the money for a piece of clothing. So, poor Arjun scours Chandigarh for the meagre sum he requires in to order not to disappoint his son.

This bit of the plot, one of the film's most crucial narrative pegs, is unconvincing to say the least, pretty much like the sixes and fours that the man smashes at will when he has a cricket bat in his hands. It comes across more as a contrivance than a believable struggle of a gentleman with his back to the wall.

Despite its overly simplistic moorings, Jersey has emotional heft because the father's desire to live up to his son's expectations is palpable and essential, if devoid of complexity. Arjun's negotiations with his wife, on the other hand, are marked by ambiguity and elements of uncertainty.

It is not often that a Hindi film portrays a man-woman marital relationship with such sobriety. In Jersey, gender roles are blurred seamlessly. The woman is her own mistress and does not shy away from putting her foot down when matters come to a head. Her man respects her for her sternness, a fact that comes to the fore even when the marriage teeters on the edge. Neither of the two raves and rants to get a point across.

Jersey is, in the end, a story of loss and hope, tragedy and tenacity, the vicissitudes of fate and the assertion of the human spirit. It is told with a fair degree of flair until the 'explosive' cricket action gets in the way.

The best way to enjoy the film, therefore, would be to discount the flatness of the one-way cricketing action - everything Arjun does on the field is crowned with success, so one is never exactly waiting with bated breath to find out how his outings with the bat are going to pan out - and concentrate on the unfolding and shifting family drama that is on offer.

On the acting front, Shahid is the Man of the Match all right. The team effort behind him is strengthened by the performances from Mrunal Thakur, who lends a quite grace to conveying both the inner turmoil and the fortitude of a woman holding firm amid many an upheaval, and Ronit Kamra, a confident child actor who played the same role in the Telugu original.

Although the character of the hero's cricket mentor, a man who has never graduated beyond being the assistant coach of the Punjab team, isn't etched out with sufficient clarity, Pankaj Kapur, being the actor he is, sails through the role with aplomb.

In one sequence, when the character has gone from being old to very old, Kapur effects a sharp intonation change and holds a consistent line with it. Pure magic. Had Jersey packed more such strokes into its repertoire, it would have shone much brighter.

Guilty Minds Review: Shriya Pilgaonkar Is Mesmerising In A Legal Series With A Mellow Sense Of Drama