"In reaction to my emotional Mother's Day post, my mom sends me this," wrote Abhishek On Mother's Day, Abhishek Bachchan and Shweta Bachchan Nanda shared endearing posts for mom Jaya Bachchan but she was in the mood for some humour. Hours after sharing his Mother's Day post, Abhishek shared an update on his Instagram story. Abhishek's "emotional" Mother's Day note was responded to with a savage meme by Jaya. "In reaction to my emotional Mother's Day post, my mom sends me this," wrote Abhishek, sharing the meme, which mentions something like "Dragon mom corner." Blame it on the lack of spell-check. Abhishek added this to his story: "Sense of humour game, on point!" Here's what Jaya Bachchan sent Abhishek, take a look. 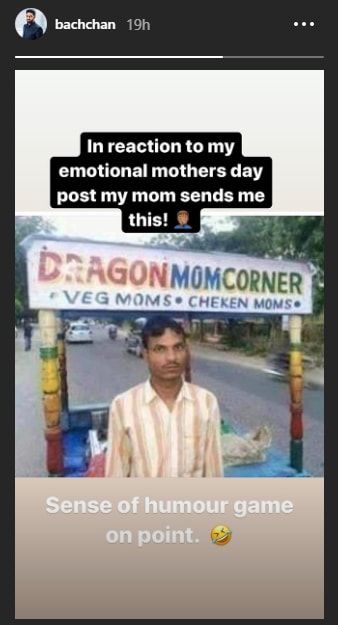 On May 10, Abhishek shared a throwback of himself along with his mother and he wrote: "Maa. Happy Mother's Day." Shweta Bachchan dropped a comment on her brother's post and wrote: "Look at how young. Lovely."

On her own Instagram, Shweta picked out a stunning family photo featuring Jaya, Abhishek and herself to write: "Mothers and grandmothers are always right." Shweta also shared a photo with her grandmom.

On an episode of Koffee With Karan Season 7, Abhishek and Shweta had revealed that he is Jaya Bachchan's favourite while Amitabh Bachchan is a bit too fond of Shweta.

On the work front, Abhishek Bachchan will next be seen in Bob Biswas, a film based on the antagonist in Kahaani. It is being produced by Shah Rukh Khan's Red Chillies Entertainment. The actor also has The Big Bull, Ludo and Gulab Jamun in the pipeline.