Jagdeep Was "Loved By Millions": Tributes From Sholay Co-Star Amitabh Bachchan And Others 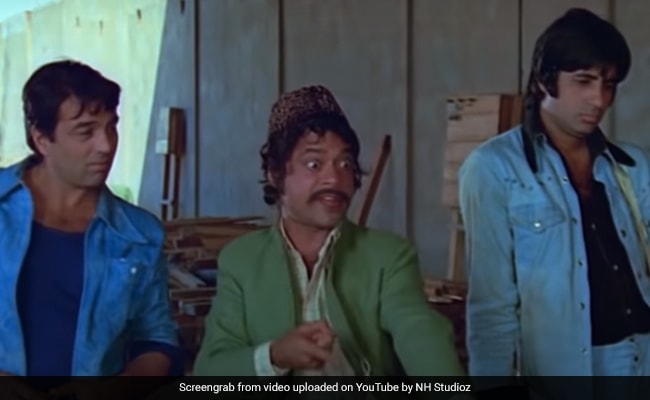 Actor Jagdeep, best known as Soorma Bhopali of 1975 film Sholay, died due to age related issues at his home in Mumbai on Wednesday. Bollywood celebs, many whom co-starred with the actor in their respective films, remembered him on social media. Actor Amitabh Bachchan, who co-starred with Jagdeep in Sholay (along with Dharmendra), remembered the actor in his blog post: "Last night we lost another gem... Jagdeep... The actor of exceptional comedic repertoire, passed away... He had crafted a unique individual style of his own .. and I had the honour of working with him in several films... the more prominent ones in the eyes of the audience being Sholay and Shahenshah... A humble human.. loved by millions."

Writer lyricist Javed Akhtar, who co-wrote the character of Soorma Bhopali (with writer Salim Khan), summed up Jagdeep's journey in cinema - as a "winsome" child artiste in Do Bigha Zamin to playing "highly emotional and dramatic roles." He added, "Comedy was his second successful inning. Great talent, underused . Good bye, sir." Javed Akhtar's son Farhan also added, "Thank you for the years of entertainment and laughs."

Jagdeep saheb had first appeared on the screen as a winsome child Artiste in films like Do bigha Zameen . As a young man he played highly emotional n dramatic roles in films like Bhabi , patang . Comedy was his second successful inning . Great talent , underused . Good bye sir .

RIP Jagdeep Sahab .. thank you for the years of entertainment and laughs. Deepest condolences to Javed, Naved & the family.

Actors Anil Kapoor and Ajay Devgn were among the first to tweet about the actor's death. Anil Kapoor, who co-starred with Jagdeep in Ek Baar Kaho, tweeted, "Jagdeep Saab was one of the greatest actors of India... He was always extremely supportive and encouraging." Ajay Devgn added, "Always enjoyed watching him on screen. He brought so much joy to the audience."

Actress Shilpa Shetty, who shared a few scenes with Jagdeep in 2002 film Rishtey (co-staring Anil Kapoor and Karisma Kapoor), shared a still from the film and wrote, "I had the good fortune to share screen space with him in Rishtey, such wonderful comic timing, in his inimitable style and an even more wonderful human."

Extremely saddened by the news of Jagdeep ji's demise.
I had the good fortune to share screen space with him in Rishtey, such wonderful comic timing, in his inimitable style and an even more wonderful human being pic.twitter.com/1If675uKkZ

May you rest in peace Jagdeep sahab. Thank you for filling our lives with smiles.

Thank you #Jagdeep sahab for enriching our lives with laughter and happiness that will be cherished for a lifetime. Rest In peace Sir. Deepest Condolences to the family, friends and millions of his fans(just like me). pic.twitter.com/jyrKFHq9Hw

Very Sad news of Actor Jagdeep's demise. Watched him since my child hood. Thank you Jagdeepjee for making a whole generation laugh out loud. Will always remember him with a smile. My deepest condolences to @jaavedjaaferi and the Entire Family.

Rest in peace #Jagdeep saab .. thank you for all the entertainment pic.twitter.com/S4uTY8kyyp

He featured in over 400 films in a career spanning over six decades.