Jagame Thandhiram Review: The tedium is lessened by the ebullience of Dhanush and the solidity of Joju George. James Cosmo makes the most of the over-the-top quality of the larger-than-life villain. 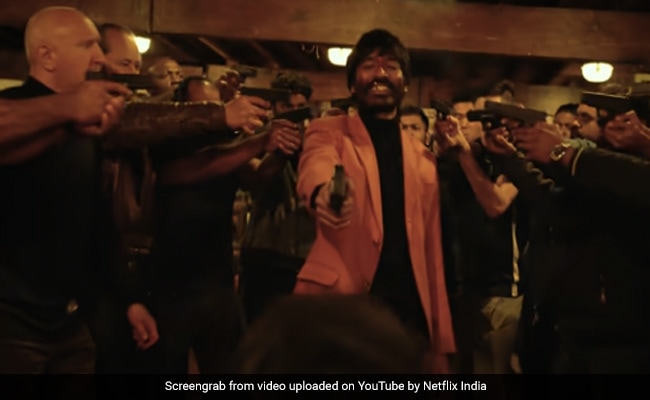 Jagame Thandhiram Review: A still from the trailer of the film. (courtesy YouTube)

Dhanush's effervescence is undeniably infectious. A few of Karthik Subbaraj's trademark directorial flourishes are passably arresting. Neither is, however, able to help Jagame Thandhiram surmount the upshots of a slapdash script and a punishing runtime.

Jagame Thandhiram, streaming on Netflix, is sporadically enlivened by the lead actor's dynamic presence and the surfeit of colour and energy that the director injects into it. The problem is that the high-voltage Tamil crime drama aspires to larger socio-political significance than its standard gang war thriller format has the scope for.

The hero of Jagame Thandhiram, gangster Suruli (Dhanush), is no paragon of virtue. A wily young man in a violent world, he is a thug with no moral compass. He will stop at nothing, not even murder and betrayal, to get what he wants. As the 158-minute film unfolds, the anti-hero makes his way through much blood and bile before he is assailed by a modicum of guilt and compelled to seek redemption. Neither the process nor its culmination is exceptionally exciting.

If anything, Suruli's uneven story represents an unpersuasive arc. It is palatable only if you are willing to turn a blind eye to the facile nature of his new-fangled activism. He suddenly wakes up to the plight of undocumented Sri Lankan Tamil refugees - one of them has washed dishes across Europe over a period 18 years until the hero befriends him and hires him as the manager of his newly-opened London restaurant - and mutates into an armed-to-the-teeth anti-racism crusader in the UK. The transformation of the rowdy is arbitrary and devoid of psychological authenticity.

When we first meet Suruli, he (in off-white formal ethnic attire) pumps four bullets into a man on a train that he stops on his way to his wedding. Before he pulls the trigger, he playfully asks the victim to help him understand the difference between 'betrothal' and 'consummation'. The answer does not satisfy Suruli and the hapless man is sent packing. If this doesn't provide a foretaste of what Jagame Thandhiram and the protagonist have lined up for us, nothing will.

There is more. The nuptial is completed but the bride runs away when she learns the groom has just committed cold-blooded murder. Life gives the man another chance and the next thing we know is that the fearless Suruli is out on a limb doing the bidding of a London crime lord Peter Sprott (veteran Scottish actor James Cosmo).

The mobster - in an early scene, he lets on that he is a supporter of Millwall FC, one of England's most despised football clubs owing to the hooliganism of its notorious fans - offers Suruli a lot of money to relocate to London for a month and eliminate an underworld rival Sivadoss (Joju George), a Sri Lankan Tamil underworld boss who smuggles arms and gold in order to fund - this is revealed late in the film - a bigger cause.

Suruli does not speak or understand a word of English. His conversations with Peter are facilitated by a go-between and interpreter Vicky (Sharath Ravi). The initial exchanges involving the three men yield a bit of mirth but the comicality of the language divide is stymied because the script opts for simultaneous and almost fully muted Tamil-English translations as the garrulous Suruli holds forth.

Even as he woos nightclub singer Attilla (Aishwarya Lekshmi), Suruli worms his way into the inner circle of the xenophobic Peter. Of course, anti-immigrant sentiments are not unheard of in the UK but the methods that Surali employs to quell it definitely are. The brief that the unscrupulous mercenary has is to infiltrate the Sivadoss gang and disrupt its activities.

Suruli's mind is as fickle as the proverbial English weather. It does not help that the screenwriter - director Subbaraj himself - is never quite sure what he wants to convey via 'the tricks of the world' that he dramatises in Jagame Thandhiram. The inconsistences that plague the lead character rob his war against racial hate of meaningful context.

Other war zones - Syria, Iraq, Afghanistan - are mentioned, but it is the strife in Sri Lanka that gets pride of place in Jagame Thandhiram. It does not, however, do the cause any good because all that the film does is trivialise a serious issue.

When he first sets his eyes on Attilla, who croons a Tamil film song in a London pub, Suruli says to Vicky even before she starts singing: "She's gorgeous. I think she is from Tamil Nadu." There is obviously no link between the two short sentences - one articulates an observation, the other conveys a presumption. As far as off-the-cuff remarks go, this one does not go too far, like much else in the film.

At the end of the performance, by which time the audience knows what Attilla's mother tongue is, Suruli, not yet as well-versed with matters geopolitical as he is soon going to be, asks the lady whether she is a Tamilian from Tamil Nadu. Not all Tamilians are from Tamil Nadu, Attilla replies. At this point, Suruli is in no position to grasp the import of that retort. In fact, he has no qualms over being a hired gun for a man whose car numberplate has 'White Power' carved on it.

A couple of hours down the line, the quick-on-the-uptake protagonist figures out that "home isn't where you are born, it's where you feel alive". He admits to Peter, described by one character as "racist, supremacist, nativist", that back home he was no different. He, too, hated outsiders. But now in a land not his own, Suruli has a far more generous view of people who are less fortunate than him, having been forced by war to flee their homeland.

The tedium is lessened somewhat by the ebullience of Dhanush and the solidity that Joju George lends to the character of Sivadoss. James Cosmo makes the most of the over-the-top quality of the larger-than-life villain that Peter Sprott is. The other actors, including Aishwarya Lekshmi, are saddled with largely ornamental roles devised as sounding boards for the hero.

Packed with action and dark humour, the thriller throws some mean punches. Not all of them land right. Certainly not the "war between ideologies" turn that Jagame Thandhiram takes after a lot of blood has been spilled. This is one twist too many for an over-stirred concoction already bursting at the seams and struggling to keep all the splinters together.

A must watch only for Dhanush fans. Jagame Thandhiram is neither Asuran nor Karnan. Reset your expectations and it might just pass muster.