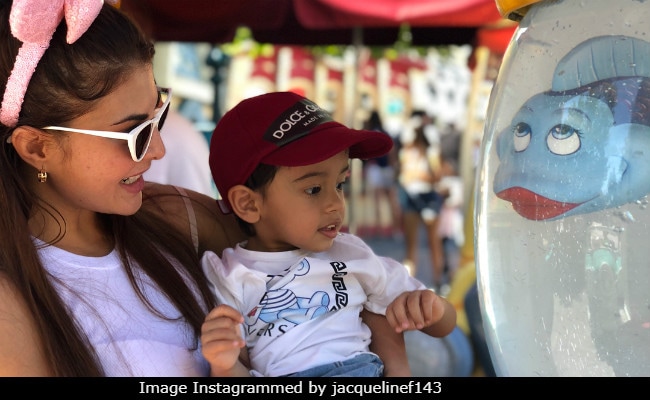 Guess who was Jacqueline Fernandez's pint-sized partner for a trip to Disneyland? The correct answer would be Salman Khan's nephew Ahil. Jacqueline filled up her Instagram stories with memories from a visit to Disneyland and shared photos with Salman's sister Arpita, her son Ahil and also Race 3 co-star Daisy Shah, who also went overboard with Instagram stories from the adventure land. Sharing frame-worthy photos from the trip, Jacqueline wrote: "When on tour be a tourist. My second Disney with this little cutie Ahil, thanks!" In the two photos and the many Instagram stories shared by Jacqueline, the Ahil and his team of adventure seekers were accessorised in typical Disney gear - Jacqueline and Daisy wore Mini Mouse headbands while Ahil was busy being adorable.

Cute little Ahil, may have celebrated his second birthday in March this year, but he's already travelled a lot with Arpita and mamu Salman Khan. Ahil's blockbuster birthday celebrations were held in Abu Dhabi earlier this year, before which, he accompanied his parents and Salman Khan to London. Last year, Ahil's first birthday celebrations were held in Maldives.

With Ahil in London over breakfast .

I am definitely the luckiest sister in the world to have the most amazing , loving , giving , caring brother ! Thank you for being this larger then life person you are in all ways. Can't thank you enough for all that you have done not only for me but all the souls you touch. Love you Bhai now and forever @beingsalmankhan Happy Rakhi , miss you

Salman Khan and team are currently in the US as part of their ongoing Da-Bangg tour, whose next show is scheduled for June 29 at Dallas. Joining and Salman, Jacqueline Fernandez and Daisy Shah on the tour are also stars like Sonakshi Sinha and Katrina Kaif.