"I promised you guys a surprise and here it is... Abhay Singh ka tashan," wrote Siddharth Malhotra 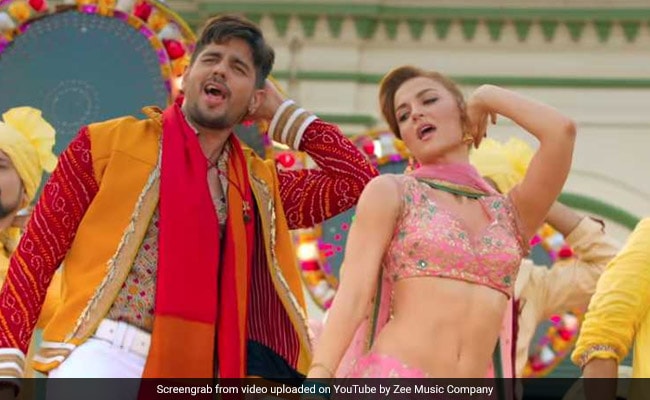 Siddharth Malhotra and Elli AvrRam in a still from the song. (Image courtesy: YouTube

Jabariya Jodi songs keep getting better and better. After Khadke Glassy, the makers released the second song from the film and we assure you that the foot tapping number will compel you to hit the dance floor. Unlike the first song, Zilla Hilela doesn't feature film's lead actress Parineeti Chopra but it does star film's lead actor Siddharth Malhotra along with Elli AvrRam. The 2-and-half minute video showcases the vibrant life of Abhay Singh aka Siddharth. Sharing the video on his Twitter profile, Siddharth wrote: "I promised you guys a surprise and here it is... Abhay Singh ka tashan. It's time for a desi celebration."

Zila Hilela has been sung by Raja Hasan, Dev Negi, Pravesh Mallick and Monali Thakur and it has been composed by Tanishk Bagchi. Check out the song here:

Meanwhile, Elli AvrRam also shared her experience of shooting for the song and she wrote: "So during the shoot as I mentioned earlier, it was so hot that I actually ended up burning myself and it wasn't funny. Thank God I didn't end up with a sunstroke because that could have become the case."

It's coming it's coming#uphilezillahile !!! So during the shoot as I mentioned earlier it was so hot!! That I actually ended up burning myself and wasn't so funny...but thank God I didn't end up with a sunstroke, cause that could have become the case#actorslife #showbiz #workhard #or #go #home #mumbai #india #bollywood #woopwoop #elliavrram

Jabariya Jodi has been directed by Prashant Singh. The film touches upon the issue of groom kidnapping of gun-point wedding, locally known as 'jabaria shaadi' in Bihar. The film is slated to release on August 2 and it will clash with Sonakshi Sinha-led Khandaani Shafakhana at the box office.