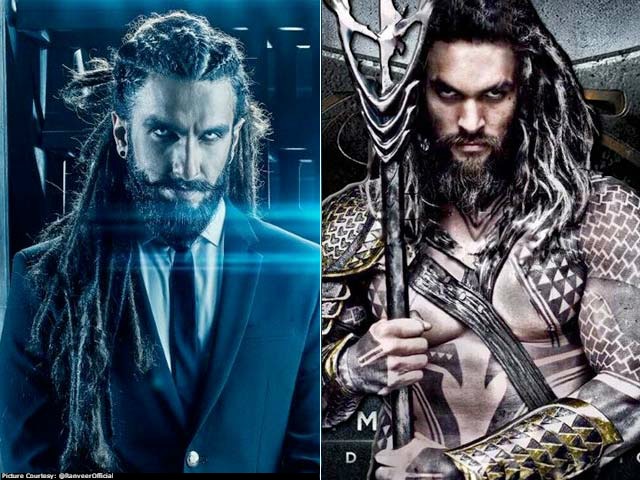 New Delhi: Actor Ranveer Singh is one Bollywood celebrity who never shies away from experimenting with his looks. From Bajirao Mastanito Goliyon Ki Rasleela Ram-Leela and now in Gully Boy, he has always been a trend-setter with his various appearances - both onscreen and off. Ranveer surprised his fans by posting a picture of himself sporting a rogue look on Thursday morning. Ranveer's look in the recent share closely resembles that of Justice League member, superhero Aquaman. The actor can be seen sporting dreadlocks and white lenses with a blue suit in the picture. The actor's look is for a brand campaign as Ranveer captioned the image as, "There's chaos in the offing...#DontHoldBack Jack & Jones India.

There's chaos in the offing...#DontHoldBack@JackJonesIndiapic.twitter.com/qFHFhX7NwV

Promoted
Listen to the latest songs, only on JioSaavn.com
Ranveer Singh, who always keep his fans and followers updated, shared another picture on Wednesday from a music studio. The actor kicked off the guess game among the fans as they started speculating that it was Ranveer's look from Zoya Akhtar's film Gully Boy, also starring Alia Bhatt. Gully Boy is story based on feisty rappers from Mumbai's streets and ghettos. Ranveer was seen wearing a funky cap with pink frame wayfarers teamed with an all-black attire. Singer Anushka Manchanda was also there in the picture. The actor seemed like working on the music of a song with the musicians in the picture.

Ranveer has already begun prepping up for Zoya's Gully Boy and will also be seen sharing the screen space with Deepika Padukone and Shahid Kapoor in Sanjay Leela Bhansali's much-talked film Padmavati.