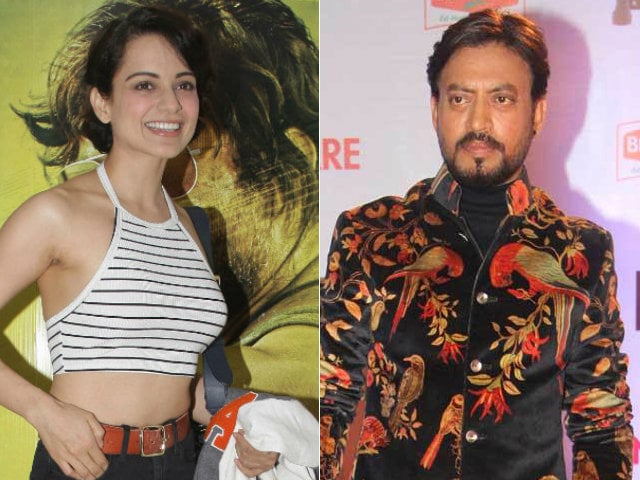 Mumbai: Actor Irrfan Khan has called Kangana Ranaut a legendary actress, saying there would be less fun to work with her if her role is small.

When told that Kangana called him a legendary actor, the Piku star said, "She is also a legendary (actress). It's her baddappan (magnanimity)." Irrfan was speaking at the screening of Marathi film Sairat.

Irrfan and Kangana were to star in a film titled Divine Lovers but there were reports that she declined the role stating she is interested only in solo leads.

When asked about it, Irrfan had sarcastically remarked that Kangana had gone out of reach. "Kangana has gone so out of reach that I will work with her only if I wish to be a heroine. So, if a script comes along wherein she plays the hero and I the heroine, I will do it," he had said.

Kangana, when told about Irrfan's comments, had said: "Irrfan always teases me. He had once told me two swords could never stay in the same sheath. I couldn't understand it. But I would like to work with Irrfan sir regardless of whatever role is offered to me."

When asked what he would like to say to Kangana's comments that she was willing to star in his film even if the role was small, Irrfan said, "What will I do then? There has to be an equal role as then there will be fun. If hers is a small role then there will be no fun. She would have said it for me about the small role."