"A few days after I came back from university, Baba decided that Ayaan and Mamma were going to shave my head," Babil wrote on Instagram 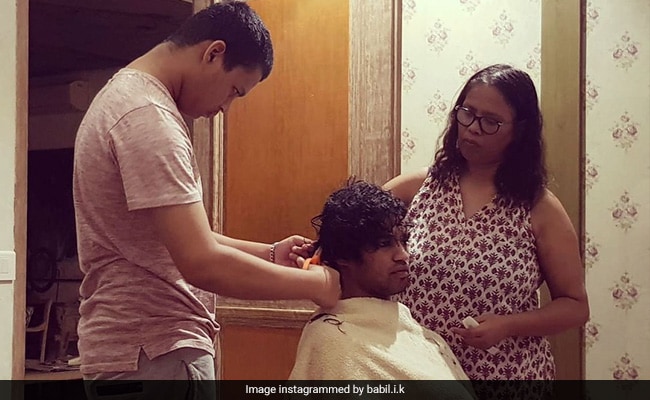 Late actor Irrfan Khan's son Babil Khan, on Tuesday, shared a bunch of throwback pictures clicked by his father on social media. The pictures are from a few days before Irrfan Khan's death in April last year. The pictures feature Babil, his mother Sutapa Sikdar and his brother Ayaan Khan. In the pictures, Babil Khan can be seen sitting on a chair as Ayaan and Sutapa cut his hair. While the first two pictures capture the mother-son duo cutting Babil's hair with a pair of scissors, the rest of the pictures feature Ayaan shaving Babil's hair with a trimmer. Sharing the pictures on Instagram, Babil revealed that in his teenage days Irrfan Khan would offer to cut his hair, but he refused his father's request.

"In the very hopeful times baba (Irrfan Khan) would ask me if I'd let him cut my hair. But I was a teenager, I wish I would have," Babil wrote in the caption of the post. "Any way a few days after I came back from university, Baba decided that Ayaan and Mamma (Sutapa Sikdar) were going to shave my head. (15th April 2020)," he added. At the end of the caption, he also shared that the pictures were clicked by Irrfan Khan by giving image credits to him. Fans of Irrfan Khan dropped many comments on the post. "So good," wrote a fan, while most others dropped heart emojis in the comments section of the post.

Babil Khan keeps pulling out some of the most unseen pictures of Irrfan Khan and shares them on social media. On Saturday, he had shared two throwback pictures from the time when his family had celebrated the festival of Holi at filmmaker Tigmanshu Dhulia's house. The pictures feature Babil as a toddler with his parents.

On the death anniversary of the late actor, Babil had shared a picture from the times when Irrfan Khan was on chemotherapy for his cancer treatment. He complemented the post with a long touching caption on Instagram.

Irrfan Khan died on April 29 last year, after a long battle with cancer. He was 53. He is known for his work in some of the most critically acclaimed films like Paan Singh Tomar , The Lunchbox , Maqbool, Piku and many more.