"Yoga is the journey of the self, through the self, to the self," wrote Sara Ali Khan 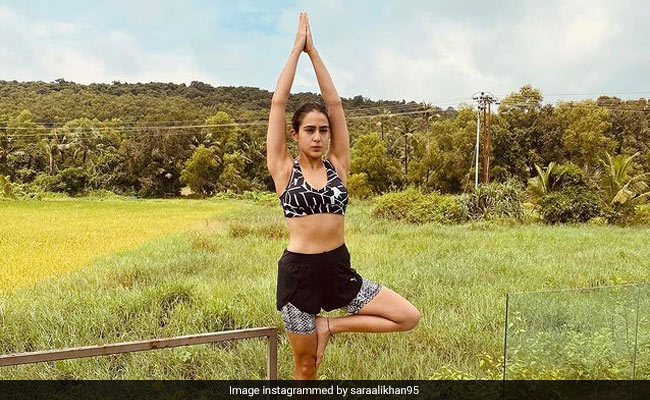 Sara Ali Khan, making the best use of International Yoga Day, posted a picture of herself doing (no points for guessing) yoga. The 25-year-old actress shared a photograph on her Instagram profile, in which she can be seen doing the Eka Pada Pranamasana or the one-legged prayer pose. Sara found the perfect spot for her morning routine - surrounded by foliage and trees in the backdrop. Sara can be seen dressed in a printed tank top and a pair of shorts. She captioned the post: "Yoga is the journey of the self, through the self, to the self. Happy International Yoga Day. #peace #positivity #serenity #nature #balance."

The Simmba actress, who often shares pictures from yoga sessions, opened up about her weight loss and transformation journey during Karan Johar's talk show Koffee With Karan a few years ago. During the show, Karan Johar played two clips featuring Sara Ali Khan from when she was studying in Columbia University. She weighed 96 kilos then. Speaking of which, Sara said: "I had PCOD. I still do and because of that I think I put on the amount of weight that I did."

Sara's upcoming project includes Atrangi Re, co-starring Akshay Kumar and Dhanush. She was last seen in Coolie No 1 remake, co-starring Varun Dhawan. The actress, who made her Bollywood debut in 2018, has featured in films such as Kedarnath (her debut film), opposite late actor Sushant Singh Rajput, Simmba, co-starring Ranveer Singh and Love Aaj Kal with Kartik Aaryan.