International Emmy Awards 2019: How Radhika Apte, Karan Johar, Zoya Akhtar And Kubbra Sait Are Gearing Up For The 'Final Call' 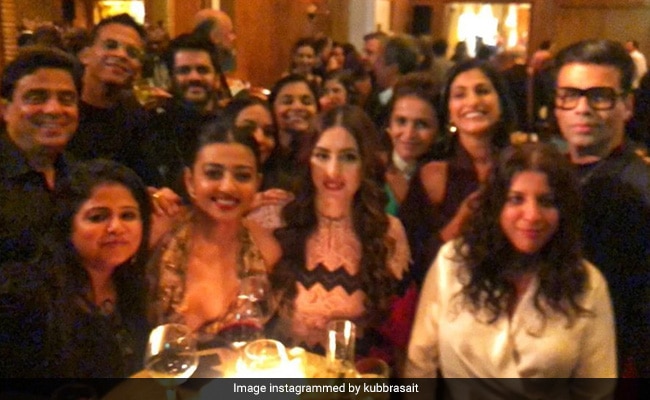 Ahead of the International Emmy Awards, Sacred Games actress Kubbra Sait posted a special picture from the closing cocktails in New York, along with Radhika Apte, filmmakers Karan Johar and Zoya Akhtar and Ishika Mohan Motwane and others. In the picture, the nominees can be seen flashing bright ear-to-ear grins and they have all the reasons to. On Monday night, Kubbra Sait shared a slightly blurry photograph (but we are not complaining at all). She wrote: "Some blurs are good too." She added, "The nominees and the jazz at the closing cocktails of the International Emmys. We are ready for the final call tonight."

Some blurs are good too. The nominees and the jazz at the closing cocktails of the #InternationalEmmys we are ready for the final call tonight! @sacredgames_tv #LustStories @netflix_in @iemmys

Meanwhile, Radhika Apte, who has been nominated for the Best Actress in a Drama Series award for her role in Lust Stories, posted a picture with her 'nomination medal,' which was presented to her over the weekend in New York. She shared the pictures on her Instagram profile and she captioned it: "Nomination medal! Thank you International Emmys! Every nominee was given a medal today... So honoured! Looking forward to the main ceremony on Monday."

Nomination medal!Thank you @iemmys ! Every nominee was given a medal today.. So honoured! Looking forward to the main ceremony on Monday!

Here's how Karan Johar is gearing up for the big night. He posted a picture on Instagram and wrote: "Countdown to the international Emmys in NYC! We are ecstatic to be nominated for Lust Stories."

Countdown to the international EMMY'S in NYC! We are ecstatic to be nominated for #luststories ! Styled by @nikitajaisinghani in @vetements_official @gucci @len5bm

Radhika Apte received the Best Actress nomination for her performance in Lust Stories. She featured in a segment directed by Anurag Kashyap. Netflix's anthology film Lust Stories also received an Emmys nomination in the in the TV Movie/Mini Series category.