Inside Twinkle Khanna And Akshay Kumar's Christmas Party. Can You Spot The Two Santas? 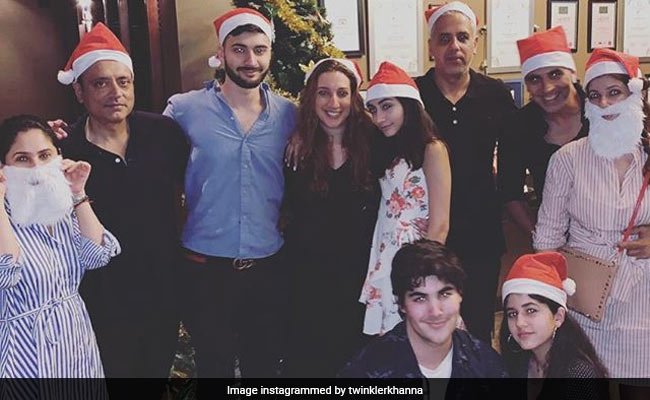 Twinkle Khanna, who had a fun Christmas with her family and friends, shared a glimpse from her celebration on her Instagram timeline on Tuesday. Twinkle's intimate Christmas party included her actor-husband Akshay Kumar, son Aarav, sister Rinke and her family. Twinkle Khanna summed up her Christmas celebration with the perfect family picture but in case you are finding it difficult to spot the actress and her sister in the photo, take a closer look at it. The one on the extreme right end of the photo sporting a white long beard like Santa Claus is Twinkle while Rinke stands on the extreme right end of the picture (also sporting the same long beard). "The Khanna sisters do their best Santa impression. MerryChristmas," Twinkle captioned the picture. Twinkle's post has been liked by Malaika Arora, Riddhima Kapoor, Sonali Bendre and Manish Malhotra.

The Khanna sisters do their best Santa impression:) MerryChristmas! #TheMoreTheMerrier

Rinke makes very rare appearance on Twinkle's social media posts. On her birthday, Twinkle Khanna shared an adorable post, which also included a reference to Akshay Kumar. Sharing a collage of throwback photos featuring Rinke, Twinkle wrote: "Happy birthday to the best sister in the world. Like the husband says - never take any side when these two fight because they make up instantly and then you are the villain."

Happy birthday to the best sister in the world! Like the husband says- never take any side when these two fight because they make up instantly and then you are the villain:) #sistersbeforemisters #KhannaSisters

Twinkle and Rinke are daughters of actors Dimple Kapadia and Rajesh Khanna. Twinkle, a former actress and now a best-selling author, is married to actor Akshay Kumar. Twinkle also produced her husband's film PadMan, which released earlier this year. The couple are parents to Aarav, 16, and six-year-old Nitara.

Rinke Khanna, who featured in films such as Pyaar Mein Kabhi Kabhi and Jis Desh Mein Ganga Rehta Hain, married businessman Sameer Saran in 2003 and moved to London. The actress was last seen in 2003 film Jhankar Beats. Her cameo in Kareena Kapoor and Rahul Bose's Chameli was her last onscreen appearance.