Inside Samantha Ruth Prabhu's Fam-Jam With Nagarjuna, Naga Chaitanya And Others 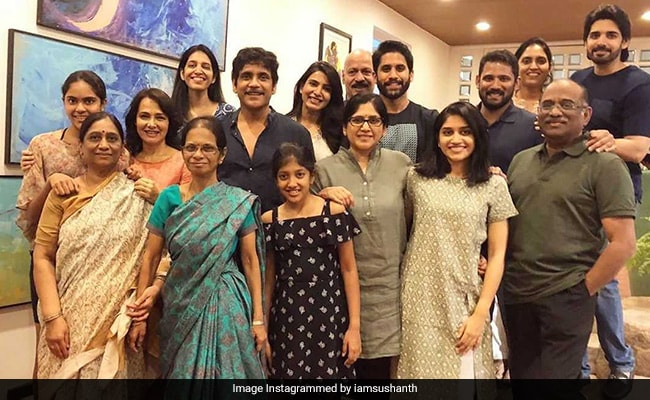 A portrait of the Akkineni family. (Image courtesy: iamsushanth)

Samantha Prabhu Ruth and Naga Chaitanya managed to scoop some time out of their busy schedules and they spent time with their family. On Wednesday, Nagarjuna's nephew Sushanth shared a family portrait on his Instagram profile, which features Akkineni Nagarjuna, Samantha Prabhu Ruth and Naga Chaitanya. The picture also features Nagarjuna's wife Amala Akkineni. Sushanth captioned the post: "Fam Jam. (Missed the rest!)." He accompanied the post along with a heart emoji. Needless to say, the star-studded picture of the Akkineni's received lots of love from fans on Instagram. Remarks like "beautiful family" were seen resurfacing in the comments section. Another section of the Internet wasn't happy about the fact that Akhil Akkineni was missing from the photograph and curious fans wrote comments like "Where is Akhil?"

Later, the picture was also shared by Samantha Prabhu Ruth on her Instagram story.Without much ado, take a look at the star-studded picture here:

Samantha Prabhu Ruth is the daughter-in-law of superstar Nagarjuna. She is married to his son Naga Chaitanya. The couple got married in 2017 in a lavish two-part ceremony in Goa. The star couple have co-starred in films such as Ye Maaya Chesave, Vinnaithaandi Varuvaayaa, Thrayam, Autonagar Surya and Manam.

On the work front, Samantha, was last seen in Majili, opposite Naga Chaitanya. She is currently awaiting the release of Oh Baby, which is slated to release in July. She also has Manmadhudu 2 and the remake of 96 in the pipeline.