"Rishi Sir, you are looking amazing and Genelia and I were so happy to come see you," wrote Riteish 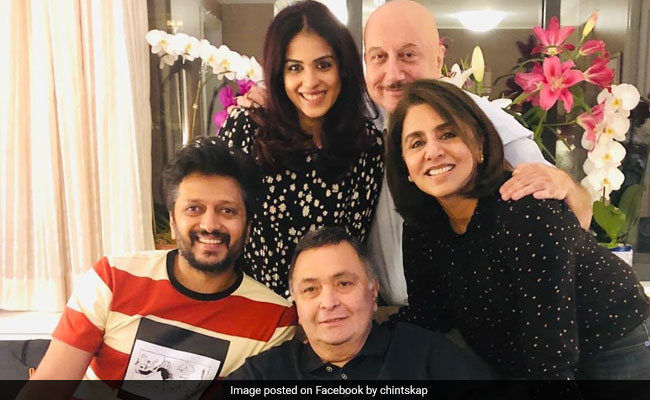 Riteish Deshmukh and Genelia D'Souza are the latest actors to sign Rishi Kapoor and Neetu Kapoor's visitors log in New York. On Friday, Rishi Kapoor, who is currently in the Big Apple for his cancer treatment, shared a picture from his meeting with the actors. They were also joined by actor Anupam Kher, who is all in New York these days. Sharing the glimpse from their meeting on Twitter, Rishi Kapor wrote: "Thank you Anupam Kher, Riteish Deshmukh, Genelia D'Souza for visiting us. What an inspirational saga. Please publish it. Love all of you."

Meanwhile, Riteish Deshmukh also shared the same photograph on his Twitter profile and he wrote: "Thank you for a fantastic evening. Rishi sir, you are looking amazing and Genelia and I were so happy to come see you. Neetu Ma'am - you are an amazing host. The food was incredible and I want to repeat the same thing I told you 10 years ago when I first met you -You are so beautiful."

Thank you for a fantastic evening @chintskap sir, you are looking amazing & @geneliad & me were so happy to come see u. #Neetu mam - you are an amazing host, food was incredible & I want to repeat the same thing I told you 10 years ago when I first met you -You are so beautiful. https://t.co/WZv0oUkIP4

Rishi Kapoor and Neetu Kapoor moved to New York about ten months ago, after the Mulk actor was diagnosed with cancer. During his stay there, Rishi Kapoor got constant support from his family members, who frequently visited him. Besides members of the Kapoor clan, Rishi Kapoor was visited by several Bollywood stars there, which included Shah Rukh Khan, Aamir Khan, Deepika Padukone, Malaika Arora among others.

Rishi Kapoor is expected to return to Mumbai to celebrate his 67th birthday in September. In an interview, he told Mumbai Mirror, "Yes, I am trying to return by August-end, depending on what the doctors at the hospital say. I have recovered well and I am feeling good. Must be 100% fit by the time I am back."

Rishi Kapoor was last seen in the comedy drama Jhootha Kahin Ka, co-starring Omkar Kapoor and Sunny Singh, which he filmed before leaving for the US. The Rajma Chawal actor has not announced an upcoming project as of now.