Inside Ravi Dubey And Sargun Mehta's Dreamy Vacation In Maldives 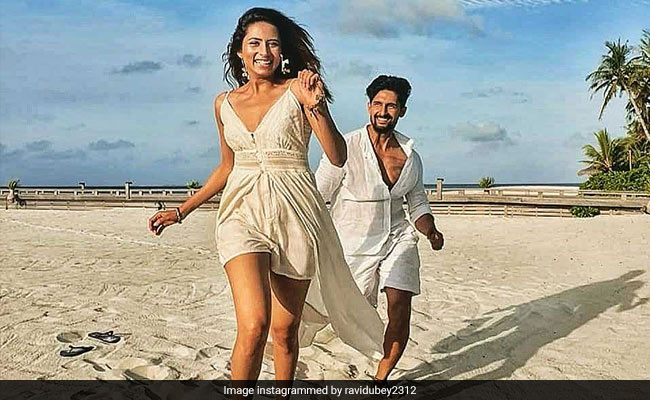 TV stars Ravi Dubey and Sargun Mehta are giving us major vacation goals. The couple, who is currently on a vacation in Maldives, have been delighting their Instafam with several envy-inducing photographs. In one of the pictures shared by Ravi on his Instagram profile, the couple can be seen twinning in white outfits as they happily pose on the beach. The couple shared a series of loved-up pictures from their Maldives vacation, some of which are selfies. Ravi Dubey and Sargun Mehta got married in 2013. The couple who worked together in the TV show 12/24 Karol Bagh and Nach Baliye, started dating in 2010.

Take a look at Ravi and Sarhun's vacation pictures here:

Ravi Dubey is best-known for his performance in TV shows like 12/24 Karol Bagh, Saas Bina Sasural and Jamai Raja among others. He has also participated in several TV reality shows such as Khatron Ke Khiladi season 8. The actor has even hosted reality TV show like Entertainment Ki Raat, Rising Star 2 and Sabse Smart Kaun to name a few.

Ravi stepped into Bollywood with the 2011 film U R My Jaan, which was a Hindi remake of the 1990 film Pretty Woman, which starred Julia Roberts and Richard Gere. He will next be seen in 3 Dev, which also features Karan Singh Grover.

Sargun Mehta started her television career in 2009 with 12/24 Karol Bagh. She also featured in shows like Phulwa and Apno Ke Liye Geeta Ka Dharmayudh. In 2015, Sargun starred in a Punjabi film Angrej.