The Kapoors organized for a private dinner party at their home for Janhvi, who turned 21 on Tuesday 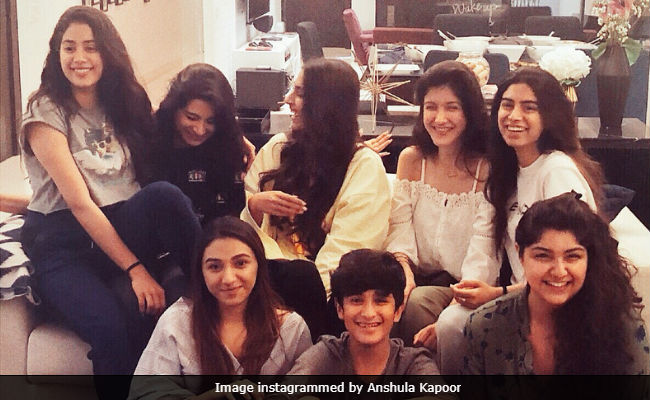 New Delhi: Janhvi Kapoor, in the first half of her birthday, visited an orphanage to celebrate with the children, as her late mother Sridevi did before her. She ended her birthday with a very quiet and private dinner at the Kapoor residence with her family members by her side. Janhvi's half-sister Anushla Kapoor (daughter of Boney Kapoor and Mona Shourie) shared pictures on her Instagram account (which is not verified). In the pictures, the Kapoor sisters smiled and laughed with different types of cakes set on the table. Janhvi was seated right next to Rhea and Sonam (daughters of Anil and Sunita Kapoor) while Janhvi's younger sibling Khushi sat close to Shanaya (daughter of Sanjay and Maheep Kapoor). Anushla and Jahaan (Sanjay and Maheep's son) sat with filmmaker Rajkumar Santoshi's daughter Tanisha.

Arjun Kapoor skipped the dinner as he has resumed filming Namastey England with Parineeti Chopra in Punjab. But fans of the Kapoor family loved the pictures anyway and said that they are setting "family goals." One comment read: "Lovely, look good together... Hum Saath Saath Hai."

Earlier in day, Janhvi visited an orphanage, the pictures of which went crazy. Here are some photos of Janhvi at the orphanage.

@janhvikapoor you're my light!I'm so proud of you. May you always have a reason to smile

Janhvi lost her mother Sridevi 10 days before her 21st birthday. Sridevi died by accidently drowning in the bathtub of the hotel room she was staying in Dubai. She was brought to Mumbai three days after the completion of all the medico-legal formalities.

Promoted
Listen to the latest songs, only on JioSaavn.com
On Saturday, Janhvi posted an emotional tribute of Sridevi in which she wrote: "Even with all this emptiness, I still feel your love. I feel you protecting me from sadness and pain." Janhvi also appealed to her fans and Instagram followers to "love your parents. Cherish them and devote yourself to making them feel that love."

On my birthday, the only thing I ask of all of you is that you love your parents. Cherish them and devote yourself to making them feel that love. They have made you. And I ask that you remember my mother fondly, pray for her soul to rest in peace. Let the love and adulation you'll showered on her continue and please know that the biggest part of my mother was the love she shared with papa. And their love is immortal because there was nothing like it in the whole world. Nothing as joyful and pure and no two people as devoted to one another as they were. Please respect that because it hurts to think anyone would ever try to tarnish it. Preserving the sanctity of what they had would mean the world not only to my mother but also to a man who's entire being revolved around her, and her two children who are all that remains of their love. Me and Khushi have lost our mother but papa has lost his "Jaan". She was so much more than just an actor or a mother or a wife. She was the ultimate and the best in all these roles. It mattered a great deal to her to give love and to get love. For people to be good and gracious and kind. She didn't understand frustration or malice or jealousy. So let's be that. Let's be full of only good and give only love. That would make her happy, to know that even in death, she gave you all something. The courage and inspiration to fill yourselves with nothing but love and rid yourselves of bitterness in any way and form. That's what she stood for. Dignity, strength and innocence. Thank you for the love and support everyone has shown us in the past couple of days. It's given us hope and strength and we can't thank you all enough.

Janhvi is all set to make her Bollywood debut in Shashank Khaitan's Dhadak, which is produced by Karan Johar. The film also stars Ishaan Khatter.