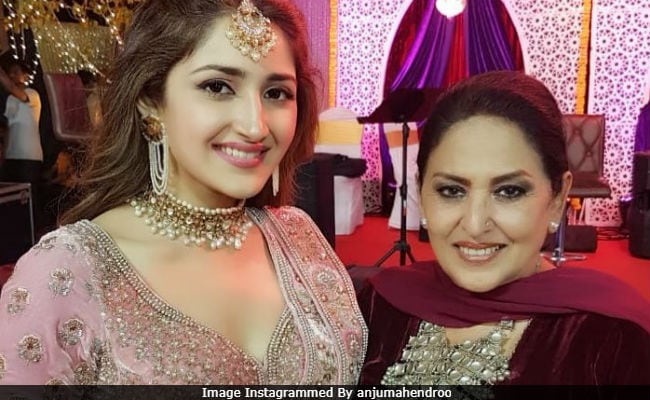 The celebrations for actors Sayyeshaa Saigal and Arya's wedding have already begun. Several pictures from what appears to be a sangeet ceremony have been shared on social media and actors like Sanjay Dutt, Aditya Pancholi, Sooraj Pancholi feature in them. Veteran actress Anju Mahendroo has also posted some inside pictures from the ceremony on her Instagram timeline (unverified). In one of the pictures, Sanjay Dutt can be seen greeting Ms Mahendroo and she also treated us to a picture of the bride-to-be Sayyeshaa, who looked beautiful in a pink embellished lehenga. (No picture of Arya has been shared as of yet). Bigg Boss 11's Sabyasachi Satpathy can also be seen in the pictures. Take a look.

Guess who I bumped into ?

We also chanced upon a video of Sayyeshaa, in which she can be seen dancing to Shahid Kapoor and Kareena Kapoor's hit song Mauja Hi Mauja (Jab We Met). The video was posted by a fan club.

According to reports, Sayyeshaa and Arya's wedding is scheduled for March 9 and 10 in Hyderabad. The couple had announced their March wedding on Valentine's Day, but didn't reveal any date. "With the blessings of our parents and family, we are delighted to share with you the most beautiful day of our lives. We are getting married this March! We seek your love and blessings in our new journey of happiness and togetherness - Arya and Sayyeshaa," read the statement they posted on social media.

Sayyeshaa is the grandniece of Saira Banu and Dilip Kumar. Her mother Shaheen is Saira Banu's brother's daughter. Shaheen was also an actress and she was married to actor-producer Sumeet Saigal from 1990 to 2003.

Sayyeshaa Saigal, best-known for her role in Shivaay, reportedly met Arya while shooting for 2018's Ghajinikanth. Kaappaan is their next film together.