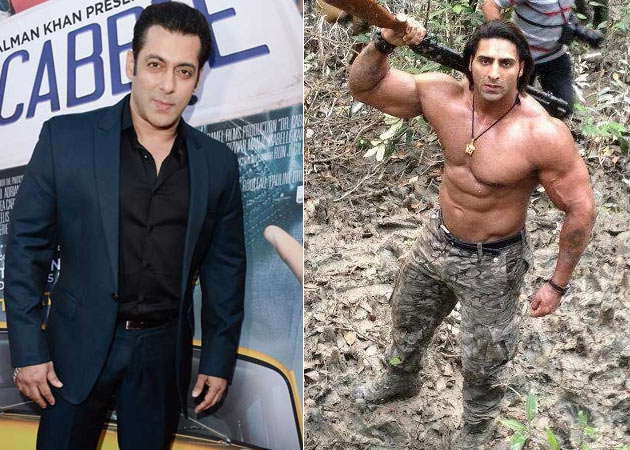 This image was posted on Twitter by Punjabi Muscle

Salman Khan is known to be generous when it comes to helping newcomers in the industry. He has spotted a lot of talent in the past and buzz has it that thanks to him, India's first vegetarian wrestler, Varinder Singh Ghuman, who will be seen in Kamal Sadanah's directorial debut, Roar - Tigers of the Sunderbans, will also star in a film based on Gama Pehalwan.

Sources say that Salman first spotted Varinder during the shoot of Sadanah's film; the actor apparently discussed casting him in Sohail Khan's Sher Khan. But their conversation was not taken forward since Sohail's film got delayed. That said, Salman recently met the wrestler at the first look launch of Kamal Sadanah's film, and that's where Salman apparently spoke to Varinder and roped him in to play a wrestler in Gama Pehalwan.

Promoted
Listen to the latest songs, only on JioSaavn.com
Says Varinder, "I was rehearsing for an action sequence with actor Allan Amin for Kamal Sadanah's film at Mehboob Studios when Salman dropped in on the sets since he was shooting for one of his films at the same studio. He then met me and offered me a role in Sher Khan, but the film got pushed ahead. When we met again recently, he offered me a pivotal role in this film based on Gama Pehalwan's life. I will be playing a wrestler in the film."

The wrestler says that he was surprised to see that the actor knew a lot about him. "We discussed my diet and a few body-building techniques. The film on Gama Pehalwan will go on the floors first and I am hoping that I will also be a part of Sohail bhai's Sher Khan," he says.