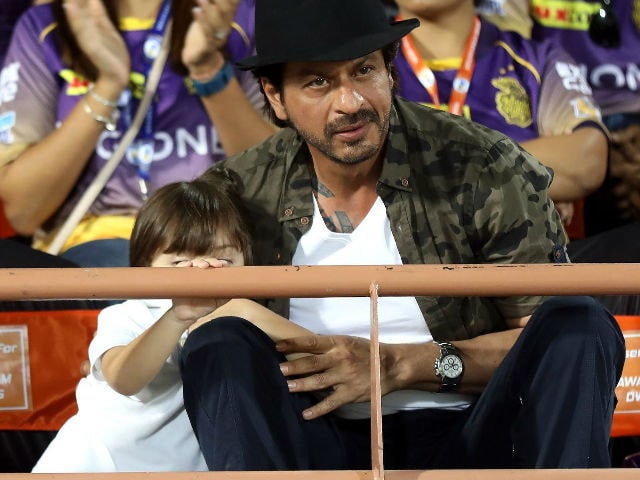 New Delhi: Actor Shah Rukh Khan arrived for the first Kolkata Knight Riders match of Indian Premier League 10 in style with his son AbRam on Friday in Rajkot's Saurashtra Cricket Association Stadium. Like always, Shah Rukh and AbRam's pictures from the stands went viral but this time Twitter found something new to crush on. It was AbRam's tattoo (definitely, temporary). Shah Rukh's three-year-old son was sporting a similar tattoo as his father and Twitter simply loved it. "Father-Son Relation Goals (sic)," tweeted one user while many others expressed their feeling with heart emoticons. Shah Rukh Khan, who starred in this year's Raees, was spotted in the stands wearing a white tee with denims and a hat, keeping a close eye on AbRam, who also joined KKR cheer squad.

Promoted
Listen to the latest songs, only on JioSaavn.com
Shah Rukh Khan was last seen in Rahul Dholakia's Raees co-starring Pakistani actress Mahira Khan and Nawazuddin Siddiqui. His next is Imtiaz Ali's yet-untitled film with Anushka Sharma which releases on April 11. The film was shot in Prague and Budapest and is now being filmed in Punjab. SRK travelled to Rajkot from Punjab for the match. The actor also shared this vibrant picture from the film's sets:

Lehraate Khet, Ladkiyaan, Lassi Te Love in Punjab. Thk u all for such a great shoot & to Imtiaz for bringing us here.

After Imtiaz Ali's film Shah Rukh will be seen in an Aanand L Rai film in which he plays a dwarf. He also has a cameo in Salman Khan's Tubelight, which is directed by Kabir Khan and will is slated for an Eid release on June 23.