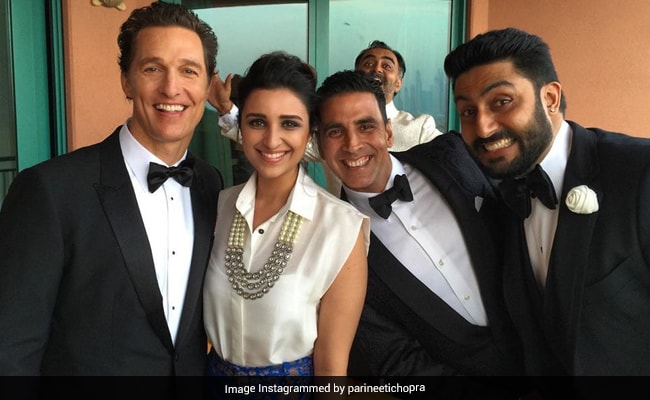 It's Bollywood's Khiladi Akshay Kumar's 53rd birthday today. On the special occasion, his Kesari co-star Parineeti Chopra shared an "epic throwback" picture featuring herself, the birthday boy, Abhishek Bachchan and guess who else? Interstellar star Matthew McConaughey. The photo happens to be from the Global Teacher Prize event that was held in Dubai in 2016. In the picture, Parineeti can be seen posing with Matthew McConaughey, Akshay Kumar and Abhishek Bachchan. Sharing the photo, Parineeti Chopra called Akshay her "favourite co-star and human being." And was all praise for setting "new standards of humility, discipline and work ethic every day" on sets.

"Happy birthday to my favourite co-star and human being! You set new standards in humility, discipline and work ethic every day. (Using this opportunity to share this epic throwback of us!" Parieenti wrote in her birthday note for Akshay.

ICYDK, the aforementioned event was also attended by Salma Hayek and Ali Fazal, among other celebrities.

Happy bday to my FAVOURITE co-star and human being! You set new standards in humility, discipline and work ethic everyday. (Using this opportunity to share this epic throwback of us!! ) @akshaykumar

Akshay Kumar and Parineeti Chopra's film Kesari released last year. It is a period drama, which has been directed by Anurag Singh and co-produced by Karan Johar's Dharma Productions and Cape Of Good Films. The film stars Akshay Kumar in the titular role and it is based on the 1897 Battle of Saragarhi.

The actor, who was last seen in Good Newwz, is currently filming Bell Bottom in London. He also has Atrangi Re with Sara Ali Khan and Dhanish, Prithviraj with Manushi Chhillar, Sooryavanshi with Katrina Kaif and Bachchan Pandey lined-up.