In Box Office Clash Between AndhaDhun And LoveYatri, Both Films Get 'Poor Start' 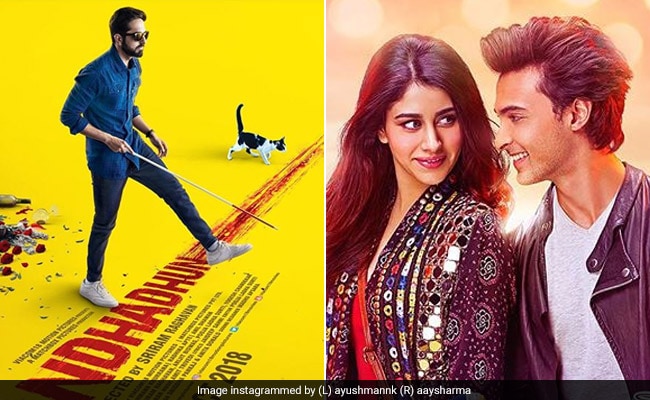 Sriram Raghavan's murder mystery AndhaDhun featuring Ayushmann Khurrana, Tabu and Radhika Apte, clashed with Aayush Sharma and Warina Hussain's LoveYatri. According to a Box Office India report, both the films have started their box office journey on a "poor" note. The morning collections for both the films are "very poor", the report stated. "AndhaDhun and LoveYatri opened to a poor 10% response with LoveYatri being a little ahead as Mumbai/Gujarat is a little better but it's about the evening as that will tell which film comes out ahead. The morning collections are very low so they don't mean anything. Even if one film improves 10-15% compared to the other it will go ahead in the evening," Box Office India report stated.

In AndhaDhun, Ayushmann Khurrana plays the role of a visually impaired musician, who finds himself in the centre of a murder mystery. Sriram Raghavan-directed film mostly opened to positive reviews. Saibal Chatterjee in his review for NDTV gave AndhaDhun 4 out of 5 stars. "Lead actor Ayushmann Khurrana has never been better: he hits it right out of the park - and then some. As good as she has ever been, Tabu, too, is astounding as a woman who exudes as much charm as deadly intent. Radhika Apte, playing markedly less tortured than she has been in most of her recent screen outings, is effortlessly pitch-perfect," he wrote.

Meanwhile, Hollywood film Venom featuring Tom Hardy and Michelle Williams, which hit the screens on Friday, has taken a "good start" at the box office. According to Box Office India report, Venom has not only affected the collections of AndhaDhun and LoveYatri, but Sui Dhaaga, which released last week, has also been "overshadowed" by the release of Tom Hardy's film. "AndhaDhun and LoveYatri have easily been overshadowed by the Hollywood release Venom, which has taken a good opening of around 25-30%. This film will collect more than the combined total of both the films unless they show huge turnaround. Venom has affected all the Hindi film being screened including Sui Dhaaga and it is on course for a solid weekend," the report added.