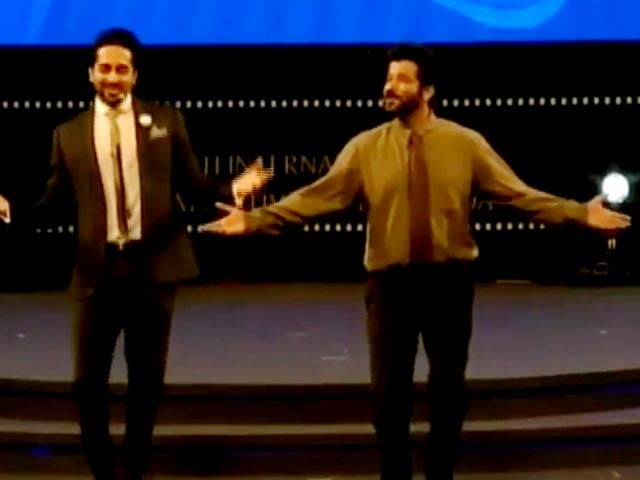 This image was tweeted by @PIB_India

Panaji: Bengali actor Dhritiman Chatterjee, who has acted in films directed by Satyajit Ray and Mrinal Sen, on Sunday took objection to Bollywood star Anil Kapoor dancing on stage during the inaugural session of the 46th edition of International Film Festival of India (IIFI).

Mr Chatterjee, who was addressing a press conference to extend his support to the protesting students of the Film and Television Institute of India (FTII), said, "IFFI, a government film festival, is taking a different course. It is no longer about good cinema. This is about entertainment. I feel very reluctant to say this, but the chief guest (Anil Kapoor) at the IFFI opening ceremony was dancing on stage? Is this an intention to make the film festival another arm of Bollywood, to entertain?"

Anil Kapoor, who was invited as the chief guest during the IFFI inauguration on Friday, did an impromptu tapori act and danced to popular songs such as My Name is Lakhan and Dhak Dhak along with hosts Aditi Rao Hydari and Ayushmann Khurrana.

Mr Chatterjee, 70, who has been part of the parallel cinema movement, also condemned the imposition of the prohibitive section 144 of the Criminal Procedure Code in Panaji, the city hosting the International Film Festival of India (IFFI).

He also questioned the idea of celebrating cinema and culture in excessive police presence.

"Section 144 is in force in Panaji. I have been associated with cinema for four decades and I have never seen such a surreal situation when a district magistrate says section 144 is imposed because a celebration of cinema is going on," Mr Chatterjee said.