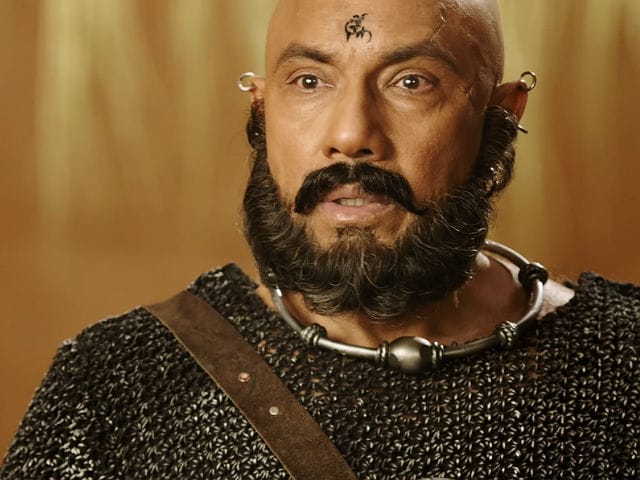 Sathyaraj as Katappa in Baahubali: The Conclusion.

New Delhi: Filmmaker SS Rajamouli's upcoming epic film Baahubali: The Conclusion is still facing the threat of a ban in Karnataka. Pro-Kannada organisations have objected to the release of the second part of the two-part drama film due to the presence actor Sathyaraj, who plays the role of Katappa in the film and commented on the Cauvery row many years ago. The director shared a video message in which he urged the pro-Kannada outfits to reconsider their protest because Sathyaraj has "nothing to lose" if the film is banned in the state. "Sathyaraj sir is not the producer or director of the film. He is one among the many artists who have worked in the film. If this movie doesn't release as planned in Karnataka, he has nothing to lose. It's unfair to target the film because of some comments he had made," director Rajamouli said in the video message he tweeted.

An appeal to all the Kannada friends... pic.twitter.com/5rJWMixnZF

"I have already discussed the situation with Sathyaraj sir. I don't have the authority or the energy to talk more on this issue. I request that our film doesn't get dragged into this controversy," he added. In a separate interview, SS Rajamouli said that Sathyaraj's comments which prompted the call for ban were made even before the release of Baahubali: The Beginning. Baahubali series producer Shobu Yarlagadda also told news agency PTI that he wants the matter to be settled "amicably."

Earlier Vatal Nagaraj, president of Kannada Chalavali Vatal, one of the organizations involved in the call for a ban, said that they were waiting for the "right time" to stage the protest against Sathyaraj's comments. "Other films of Sathyaraj which were released earlier here weren't worthy and noticeable. However, Baahubali is recognized both nationally and internationally. We were waiting for the right time," he told PTI.

Promoted
Listen to the latest songs, only on JioSaavn.com
Baahubali: The Conclusion also stars Prabhas in the titular role, Rana Daggubati as Bhallala Deva, Anushka Sharma as Devasena, Tamannaah Bhatia as Avanthika and Ramya Krishnan as Sivagami. The film will hit the screens on April 28.