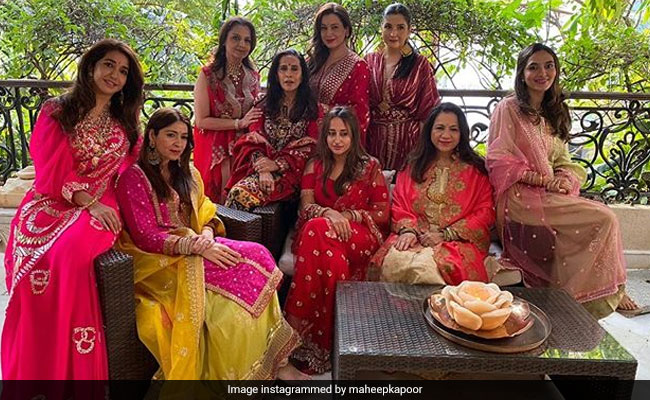 Varun Dhawan's girlfriend Natasha Dalal found a top spot on the trends' list after photos from Karwa Chauth celebrations at Sunita Kapoor's house were shared on social media. For those who may have missed it, Natasha Dalal attended Sunita Kapoor's Karwa Chauth get-together along with Varun Dhawan's mother Karuna Dhawan and his sister-in-law Jaanvi Dhawan (Varun's brother Rohit Dhawan's wife). The Internet spotted Natasha Dalal in one of the photos shared by Maheep Kapoor and couldn't stop enquiring if Natasha and Varun are already married. "Natasha and Varun married?" read a comment while another added: "Natasha Dalal spotted."

Natasha matched up to the Karwa Chauth gang in a stunning red saree styled with a cut-out choli. Swipe left to see Natasha's photo - she can be seen sitting with Karuna and Jaanvi Dhawan.

Sunita Kapoor's Karwa Chauth puja was also attended by Shilpa Shetty, who shared this video from the katha ceremony:

Our customary photo with the KC gang... after our puja and katha. Have to say this year was different, but we all got tested and were negative 😅, a prerequisite to attend but appreciated by us all. Thank you, @kapoor.sunita, for having us over and always being the bestest host. Love you. Happy Karva Chauth, ladies. ~ @maheepkapoor @bhavanapandey @laali_dhawan @jaanvidhawan @reemakarnani @natashadalal88 @neelamkotharisoni @krishikalulla . . . . . #KarvaChauth #friends #friendslikefamily #tradition #gratitude #love

Natasha Dalal often makes appearances on Varun Dhawan's Instagram. "No I won't be afraid just as long as you stand by me," he recently captioned a photo from their Goa getaway.

Happy birthday 🥳 nata. I choose you over the ufc 💙

Natasha Dalal, who is a Mumbai-based designer, is Varun Dhawan's childhood sweetheart. On an episode of Karan Johar's Koffee With Karan, Varun had confirmed for the first time that: "I am dating her and we are a couple," and added: "I plan to marry her." Varun and his long-time girlfriend Natasha were reportedly looking forward to a wedding in the summer of 2020 but it has been rescheduled because of the pandemic.