"Thank you for being you and being the most wonderful human being," wrote Miheeka for Rana Daggubati 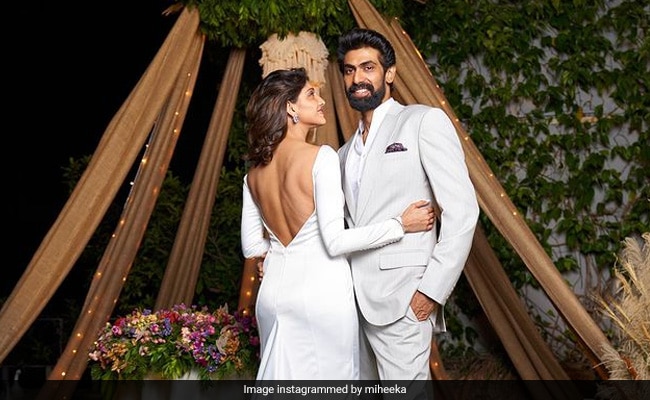 It's been a year since Rana Daggubati and Miheeka Bajaj got married in an intimate ceremony in Hyderabad on August 8. The couple celebrated their first anniversary in a really special way on Sunday. Miheeka Bajaj even posted an adorable wish for the Baahubali star with a glimpse of their anniversary celebrations. "Happy anniversary my love! It's been the most blissful year! I love you to the ends of the world and more!" wrote Miheeka in her post featuring a stunning picture of herself and Rana Daggubati twinning in white outfits. "Thank you for being you and being the most wonderful human being!! Here's to a lifetime more... Because it's a countdown till we're not around... #mylife #mylove," she added.

Rana Daggubati and Miheeka Bajaj got married in an intimate ceremony on August 8 last year. The wedding was attended by 30 guests only, in compliance with COVID-19 social distancing guidelines. Rana Daggubati's friends Ram Charan, Allu Arjun, cousin Naga Chaitanya and sister-in-law Samantha Ruth Prabhu were among the people who attended the wedding. If you haven't seen the pictures from their wedding and post-wedding festivities yet, take a look now:

Rana Daggubati, who is best-known for his performances in SS Rajamouli's Baahubali films, made his acting debut with the 2010 Telugu film Leader. Post that, he made his debut in the Hindi film industry with the 2011 film Dum Maaro Dum, in which he co-starred with Abhishek Bachchan and Bipasha Basu. Rana Daggubati went on to feature in several Telugu, Tamil and Hindi films such as Naa Ishtam, Department, Krishnam Vande Jagadgurum, Arrambam, Baby, Bangalore Naatkal, and The Ghazi Attack.