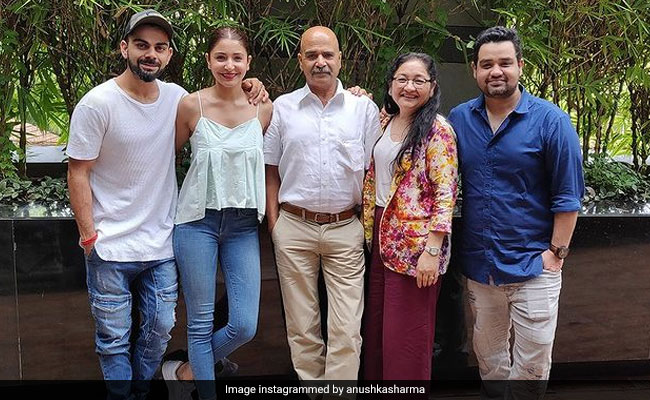 Anushka Sharma has been trending for her adorable birthday post for dad Ajay Kumar Sharma - particularly for one photo, in which there's just a glimpse of her daughter Vamika. Anushka's carousel of photos also included a major fam-jam moment, featuring husband Virat Kohli. In the photo, Virat and Anushka can be seen posing with the actress' parents - dad Ajay Kumar Sharma and mom Ashima Sharma, and brother Karnesh Sharma. In the photo, Anushka looks cute as a button, dressed in a white strappy top and denims while Virat is colour coordinated with his wife. Fan-clubs have singled out the family moment from Anushka's album and made it go viral.

Meanwhile in her birthday post on her dad's 60th birthday, Anushka attached this heart-warming note: "Celebrating 60 glorious years of the most unique 1961 special edition - my papa. Growing up he taught us the power of honesty, compassion, acceptance and righteousness and always stressed upon the peace of mind that follows by being honest and hassle free."

Anushka Sharma is currently in Pune with Virat Kohli, where Team India flew to last weekend for the Indian Vs England ODI matches. Pictures of Anushka Sharma holding little Vamika in her arms while Virat carried the luggage went crazy viral on the Internet. The couple were also accompanied by cricketer Hardik Pandya, his wife Natasa Stankovic, and their baby son Agastya.

Anushka Sharma and Virat Kohli welcomed their first child - baby daughter Vamika - on January 11. The couple have carefully avoided sharing photos of the little one on social media, only posting adorable glimpses of her. After the baby's arrival, Anushka requested the paparazzi to not take pictures of baby Vamika.