"No matter how old she may be... It's always Papaaaaa!" wrote the actor 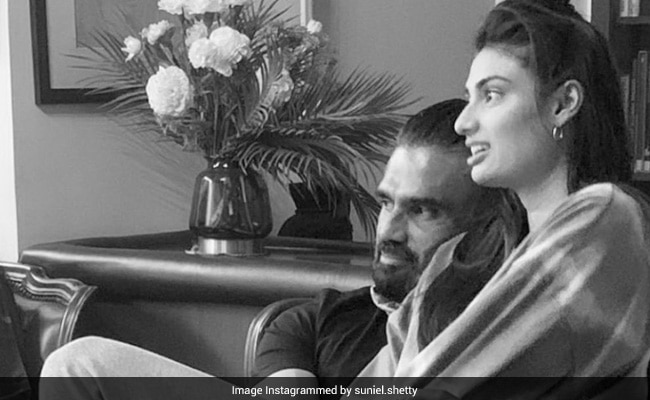 Suniel Shetty is clearly not ready to accept that daughter Athiya Shetty is now all grown-up. The actor shared a monochrome picture with 'daddy's girl' sitting on his lap. The adorable Instagram caption says, "No matter how old she maybe... It's always Papaaaaa!" In the hashtags, Suniel Shetty even asked his online family, "isn't she lovely." Then, he added, "I loved her first." The upload has collected more than 1 lakh hearts on the social media platform. People are in love with the cute father-daughter moment. The comment box is filled with red heart emoticons.

Recently, the 59-year-old celebrated 21 years of his comedy hit Hera Pheri. Suniel Shetty uploaded a still featuring himself, Akshay Kumar and Paresh Rawal from the movie and tweeted, "No wonder we underestimate how quickly time flies. It seems I blinked, and 21 years went by. What a film we made." He also mentioned that he missed late co-star Om Puri dearly.

The actor-turned-produce is a pro at the throwback game. He posted another pic from his younger days recently. In this one, Suniel is chilling on a beach, shirtless, donning a pair of sunglasses. The hilarious caption said, "What the hell was I thinking?" His son Ahan laughed hard reading it. Ritesh Deshmukh dropped a funny comment saying, "Anna, you may have been an inspiration for the 'maar daala' from Devdas." TV star Jay Bhanushali called it the 'hookstep of Garmi song.'

Suniel Shetty even asked us to guess whether his hair was "Grey, metallic, silver or salt & pepper?"