Hrithik took a trip down memory lane and found a blast from the past, which he converted into a birthday greeting for Kunal Kapoor 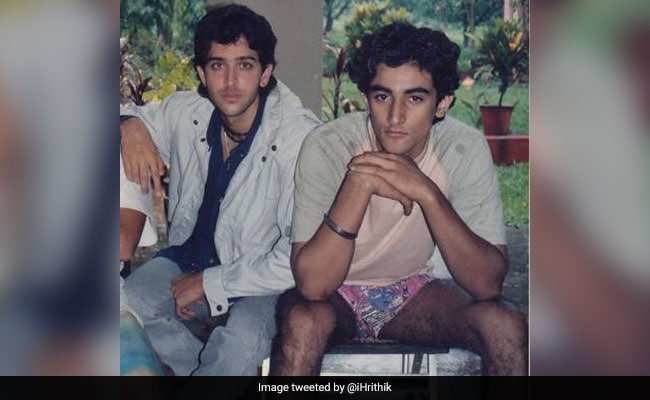 Hrithik Roshan had to do something special on his longtime friend Kunal Kapoor's birthday. So on Sunday, Hrithik took a trip down memory lane and found a blast from the past, which he converted into a birthday greeting. In the throwback memory, which appears to be from several years ago, Hrithik and Kunal can be seen posing with each other. While sharing the photo, Hrithik added an ROFL touch to his caption as he wrote: "Happy birthday man. I am so glad we don't look like these two." This cracked up Kunal, who couldn't control his laughter. Abhishek Bachchan joined in the conversation and wrote: "Love it."

This photo of Hrithik Roshan will remind you of his debut film Kaho Naa... Pyaar Hai:

Happy birthday man. I am so glad we don't look like these two ⁦@kapoorkkunal⁩ pic.twitter.com/1A5VQe0hco

Every now and then, throwback memories featuring Hrithik Roshan make it to Instagram. Earlier this year, Hrithik shared this photo from the sets of his second film Fiza from before he made his Bollywood debut with Kaho Naa... Pyaar Hai: "Wow. Overwhelmed looking at this. KNPH hadn't released. Thanks for treating me so kindly on set." Both Kaho Naa... Pyaar Hai and Fiza released in 2000.

Wow . Overwhelmed looking at this . KNPH hadn't released. Thanks for treating me so kindly on set @Jhajhajhahttps://t.co/oZrtEQJbp3

In January this year, Hrithik also featured in this throwback shared by Neil Nitin Mukesh on his birthday. Hrithik stars in the photo with his Mujhse Dosti Karoge! co-stars Kareena Kapoor and Rani Mukerji.

A very Happy birthday @hrithikroshan You are an inspiration in every way to millions likes me. God bless you with all the Happiness. Have a super year ahead. ❤️🤗🎊🎊🎊 #majorthrowback #birthday

In films, Hrithik Roshan was last seen in action thriller War. He will next be seen in the much anticipated superhero movie Krrish 4, which will be directed by his dad Rakesh Roshan. Kunal Kapoor is best known for starring in films such as Aaja Nachle, Bachna Ae Haseeno, Rang De Basanti and Don 2.