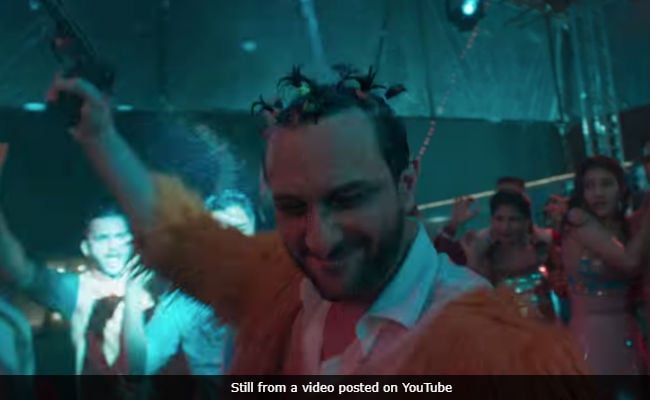 New Delhi: Saif Ali Khan's upcoming film Kaalakaandi seems intriguing given the trailer's content. On Thursday the film's new song Kaala Doreya topped the trends list and now the filmmakers revealed how Saif Ali Khan was injured while filming the song. The team was discussing the scene in which Saif Ali Khan's character will pull the trigger while dancing and during the practice shot for the same, when Saif pulled the trigger, the pressure from the recoil injured his thumb. "The team was using a real gun with dummy bullets. Saif was keen to do a practice shot so that the people around him in the scene would know the sound, light and impact of the shot since the entire mechanism changes from a real to dummy bullet," the filmmakers said in a statement.

"He was rushed to the hospital where the doctors took special care of him. Later the incident became a joke for the team," the statement read. Watch Saif Ali Khan, Akshay Oberoi and Amyra Dastur groove to Kaala Doreya:

Saif Ali Khan's last few films have not fared well on the bix office. After flops like Chef, Rangoon and Phantom, Saif will try his luck with Kaalakaandi. "I am a bankable actor in the sense that people can count on me for a good performance. (I am) someone who will push himself for a role and be well behaved. It is also important," Saif Ali Khan told news agecy PTI.

"People's liking or disliking is not for me personally, it depends on the film. Maybe, I am doing wrong kind of film. So you try and do different kind of films like Kaalakaandi, Baazaar and a web series," he added.

Kaalakaandi will hit the screens on January 12.