How Rajinikanth's Robot 'Almost Influenced' The Climax Of Avengers: Age Of Ultron 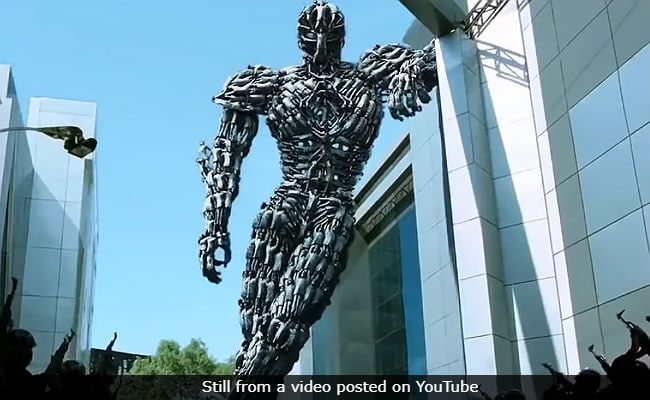 A still from Rajinikanth's Enthiran or Robot. (Image courtesy: YouTube)

Avengers series director Joe Russo said that 2015 film Avengers: Age Of Ultron, directed by Joss Whedon, almost had a scene "inspired directly" by Rajinikanth's 2010 film Enthiran (Robot in Hindi). At a recent media interaction to promote Avengers: Endgame in India, Joe Russo said that a scene in Age of Ultrons was filmed, in which several Ultrons unite to form a larger version of Ultron, just like in the finale action sequence Robot when several robots combine to form one large robot. However, the scene did not make it to the final cut. He said: "Robot almost influenced the climatic moments in Avengers: Age of Ultron," reported news agency PTI.

"In one of the final scenes all the Ultrons were suppose to form a large Ultron and Avengers were set to fight that but the sequence got cut for time. It was this close. It was inspired directly by Robot," he added.

Meanwhile, speaking about Bollywood action films, Joe Russo said that Salman Khan's Dabangg was "interesting." Speaking to the reporters, Joe Russo said: "I'm an action director so I saw Dabangg many years ago. I still have to see Dabangg 2. I thought the camera work was great in those movies. The tone and the energy is also great. So, I certainly know Salman Khan."

Joe Russo has co-directed Avengers: Infinity War and its sequel with his brother Anthony Russo. The final chapter of the franchise - Avengers: Endgame - releases in India on April 26. Endgame is the sequel to Avengers: Infinity War, at the end of which supervillain Thanos (Josh Brolin) collects all five infinity stones and wipes out half the population on Earth, including half of the Avengers.