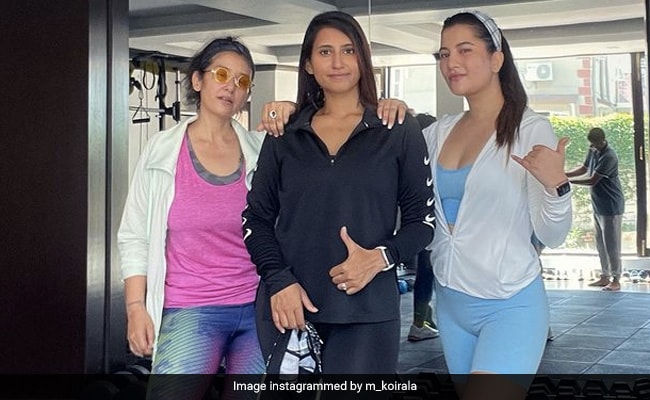 Manisha Koirala, on Thursday, shared a page from her fitness diaries. The actress posted two pictures of herself with her friends, who make "working out at home" fun for Manisha. In the pictures, the 50-year-old actress can be seen sporting a pink sports top, multicoloured tights and a white jacket. "Keep the energy up with #fitnessgals #workoutathome," wrote the actress in the comments section of her post. Guess who was among the first ones to drop a comment on Manisha Koirala's post? Actress Tabu. Reacting to the photos, Tabu commented: "Ooohh" with a heart eye and a smiling face with sunglasses emoji.

Manisha Koirala recently shared a set of pictures from her well-spent day at Nepal's Shivapuri Nagarjun National Park. "The breathtaking clear blue sky and lush green... the smell of the wet mud... breathing in the glory of nature," she captioned the photos. Take a look at the actress' post here:

In terms of work, Manisha Koirala made her acting debut with the 1989 Nepali film Pheri Bhetaula. She ventured into Bollywood with the 1991 film Saudagar and went on to star in hits such as 1942: A Love Story, Bombay, Akele Hum Akele Tum, Khamoshi: The Musical, Dil Se.. and Mann, to name a few.

Manisha Koirala was last seen in AR Rahman's 99 Songs. Before that, she featured in films such as Maska, Prassthanam and Sanju.