Anil Kapoor and Manisha Koirala in a still from 1942: A Love Story. (Image courtesy: @anilskapoor)

Anil Kapoor and Manisha Koirala's film 1942: A Love Story, which hit the screens in 1994, has completed 27 years of its release in Bollywood on Thursday. Anil Kapoor, who played the lead role in Vidhu Vinod Chopra's directorial venture, is celebrating the occasion on Instagram. The 63-year-old actor combined a few stills of the movie in a montage video and uploaded it on his Instagram handle. The song titled Ek Ladki Ko Dekha To Aisa Laga from the film can be heard in the background.

Manisha Koirala, who was the leading lady in 1942: A Love Story, shared a fan's post on her Instagram story on the occasion. In the post, we can see a picture and a clip featuring Manisha Koirala in her song Pyar Hua Chupke Se from the 1994 film. 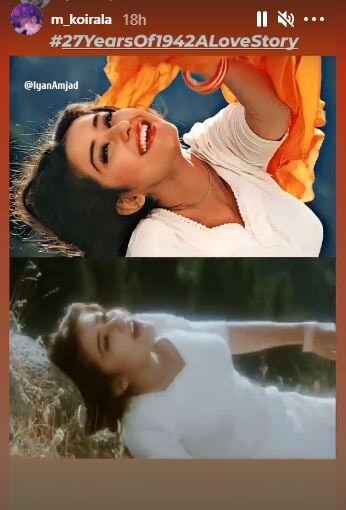 The plot of the movie was set in 1942, a few years before India's independence in 1947. The film showcased the love story of Naren Singh (Anil Kapoor) and Rajjo Pathak (Manisha Koirala) against the backdrop of social and political unrest amid India's revolutionary movement in the 1940s. While Anil Kapoor as Naren Singh played the role of an apolitical son of a British colonial employee, Manisha Koirala as Rajjo Pathak was cast as the daughter of a freedom fighter.

The soundtrack of 1942: A Love Story is credited to legendary music composer RD Burman, who died a few months before the film hit the screens. Its songs such as Ek Ladko Ko Dekha To..., Pyar Hua Chupke Se, Rim Jhim Rim Jhim, Rooth Na Jaana and Kuch Na Kaho are still enjoyed among the cinephiles even after 27 years of the film release.

Years later, the song Ek Ladki Ko... was also featured in Anil Kapoor and Sonam Kapoor's 2019 film Ek Ladki Ko Dekha Toh Aisa Laga as its title track. However, its lyrics were rewritten in the 2019 movie.

Ranbir Kapoor To NDTV On Alia Bhatt's Pregnancy: "Any Criticism Is Just Jealousy"